With New Technique, Tiny Robots Can Be Mass-Produced Like Pop-Up Books

A technique inspired by pop-up books could enable quicker production of tiny robots and other electrical devices, according to Harvard... 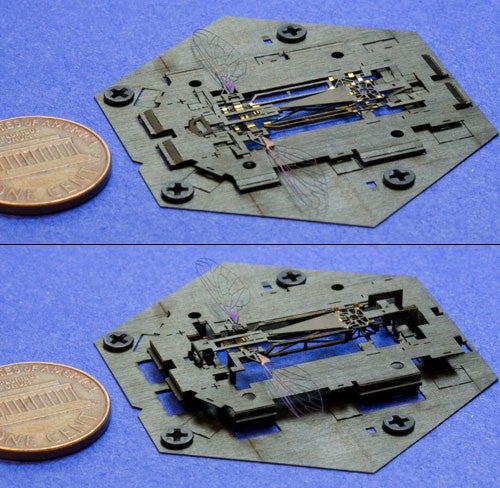 A technique inspired by pop-up books could enable quicker production of tiny robots and other electrical devices, according to Harvard engineers. Usually, building a micro aerial vehicle — or any other robot — requires a painstaking assembly process, with each little wing or sensor folded and machined just so. Now it can come together in a single fold.

It works by combining all the robots’ component layers, sandwiching each piece of metal or carbon fiber into a single sheet. First each layer is laser-etched into the proper design, and the sheets are laminated together. The end result is a hexagonal sheet with a small assembly scaffold, with the whole thing the size of a U.S. quarter.

The entire assembly has 137 folding joints. The assembly scaffold, which has folds of its own, performs 22 origami-style folds, resulting in a fully formed robot you can pop out and turn on — in this case, it’s the Harvard Monolithic Bee, or Mobee.

“This takes what is a craft, an artisanal process, and transforms it for automated mass production,” said doctoral candidate Pratheev Sreetharan, who co-developed the technique. Before this, students were dipping tiny wires into superglue and using microscopes to ensure they aligned the parts correctly.

If this sounds like an obvious solution, it’s because it’s very similar to the process used to make printed circuit boards, in which electronic pathways are etched from successive layers of conductive material. So it would theoretically be pretty easy to convert this process for high-speed robot manufacturing, and even to automate it — you could have robots manufacturing other robots.

Why would you want lots of tiny robots? The Mobee project’s goal is to have a fleet of bio-inspired robots that can behave autonomously as a colony, for various research goals. This process dramatically speeds the production cycle, Sreetharan said.

The team is publishing a paper about this manufacturing style in the March issue of the Journal of Micromechanics and Microengineering.

18 layers of laser-cut materials create the pop-up structure. Before, every part would have to be folded and assembled by hand.