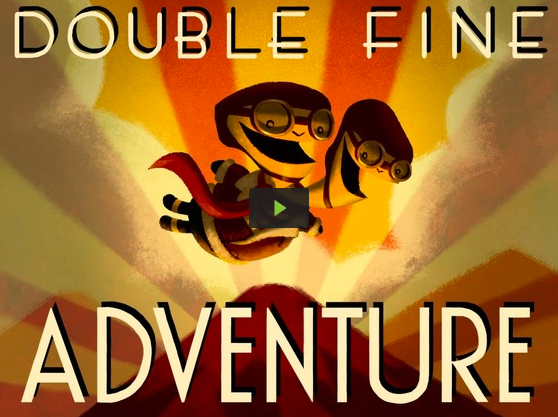 Double Fine Productions, the cultishly adored videogame developer founded by gaming legend Tim Schafer, may have just blown up the entire system of videogame production. Struggling to get funding for their next game, Double Fine posted on Kickstarter, asking for $400,000. Eight hours later, they got it. 16 hours after that, they’d shattered the previous record for the most money ever earned on Kickstarter in 24 hours.

Tim Schafer was one of the key minds behind the point-and-click adventure boom at LucasArts, creating the Monkey Island series as well as Maniac Mansion, Full Throttle, and Grim Fandango, the latter of which was awarded Game of the Year in 1998, over blockbusters like Half-Life. After leaving LucasArts and founding Double Fine Productions, he was the mind behind Psychonauts, Brütal Legend, and Stacking. Double Fine is one of the most creative, artistic, funniest, and flat-out smartest developers out there. And they sell basically nothing.

Big blockbuster games like the Call of Duty and Portal series cost millions upon millions of dollars to create, produce, and market. There’s a growing space for smaller, indie games, especially in the mobile sector, but there’s no real system in place for anything in between. Double Fine’s games are beloved, but not big sellers, and they’re far too involved to be made on the kind of shoestring budgets that mobile game developers have. Without a gaming version of the Sundance Film Festival, what are niche developers to do?

Double Fine put their new adventure game project up on Kickstarter last night, asking for $400,000 to help fund both the game and an episodic documentary showing the process of creating the game. We imagine no major publisher was willing to front that kind of money for what’s seen as a genre with limited appeal at best. (It’d be a little like trying to get funding for a black-and-white silent movie, pre-The Artist.) By putting the project on Kickstarter, Double Fine was able to bypass that entire problem.

Within eight hours, Double Fine had secured the needed $400,000. Earlier today, Kickstarter confirmed that Double Fine had broken the record for most funds raised and most backers participating in 24 hours. At the time of writing, they’ve raised over $800,000.

What about the extra money? Double Fine says: “All money raised will go to make the game and documentary better. Additional money means it can appear on more platforms, be translated into more languages, have more music and voice, and an original soundtrack for the documentary, and more!”

It’s really amazing news for fans of gaming. Developers used to need publishers (a good comparison would be musicians to record labels, or filmmakers to movie studios) to fund and print their games. But with funding from Kickstarter, and the ability to (very cheaply) stream games over services like Steam rather than printing physical copies, niche developers can make games for their fans without any big-time financial backers. It’s almost inspiring.

Learn more about the game on Kickstarter.