Archive Gallery: Steve Jobs in the Pages of Popular Science, Over Three Decades

As one of America’s greatest innovators, Steve Jobs naturally found his way into the pages of Popular Science with great... 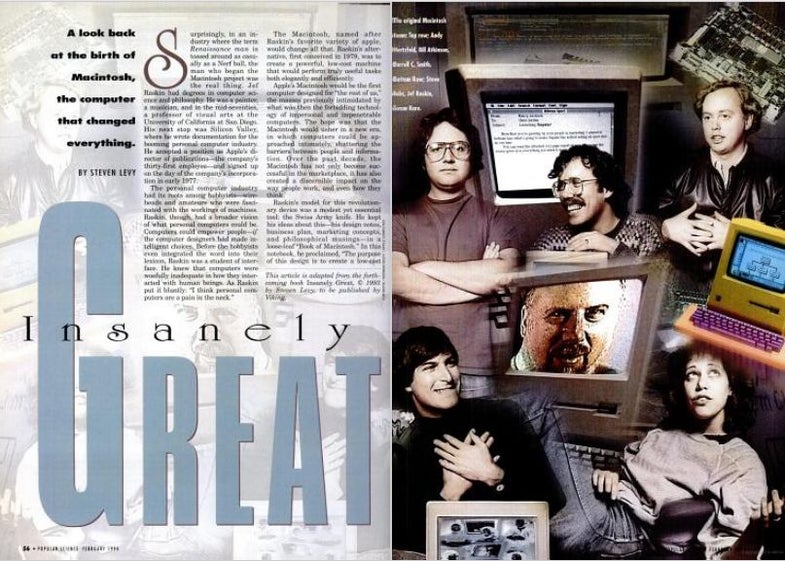 As one of America’s greatest innovators, Steve Jobs naturally found his way into the pages of Popular Science with great regularity. From the DIY spirit of Apple’s early days, to his exile and evolution at Next and Pixar, all the way into the modern iEra, we’ve covered Steve and his doings for more than three decades.

Here, we’ve collected a few standout moments in our coverage of Jobs. 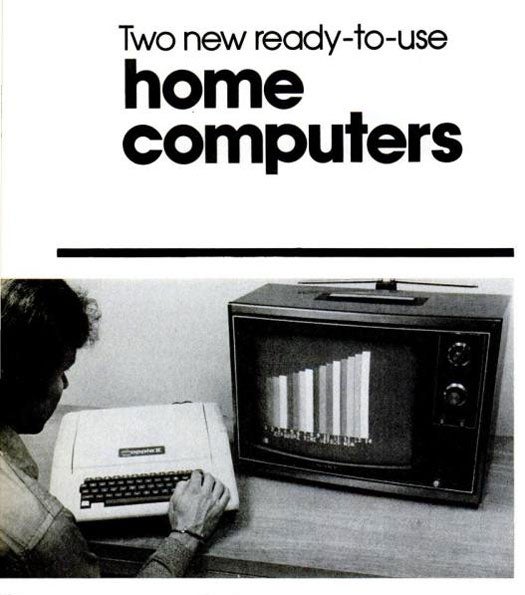 We had only good things to say about the Apple II after acquiring one just a few months after its debut. Writer William J. Hawkins noted that unlike his previous home computers, the Apple II took longer to remove from the box than it took to start working. Running an Apple II was as simple as flipping a switch — no assembly required. The specs were certainly impressive at the time. For just under $1300, you would get 4 kB of Ram, a 1 MHz microprocessor, BASIC programming language capability, and an audio cassette interface for data storage. The system also had a monitor, assembler, and disassembler programs to help you feed commands into the machine. The unit could display 15 colors and 24 lines of text by 40 columns of monochrome, all-caps text. Additionally, the Apple II accommodated seven external inputs and outputs. If you had a little spare change, you could also spring for the 16K memory, which would permit you to run more of Apple’s prepackaged cassette programs. Read the full story in Two New Ready-to-Use Home Computers 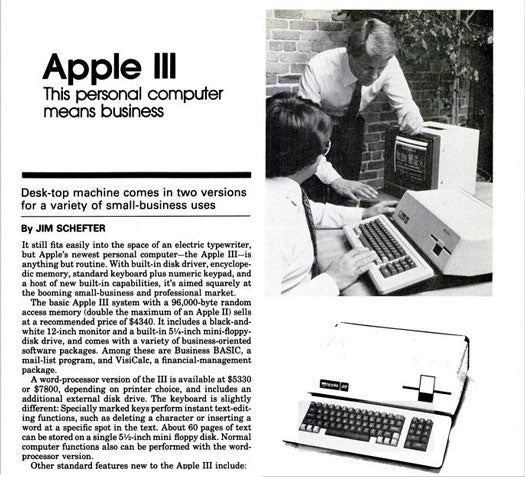 In spite of its success, Apple has had its share of flops, which include their much-lauded followup to the Apple II. The Apple III, which cost between $4340 — $7800, was designed to improve the workplace, but ended up failing at its objective thanks to the system’s instability. The basic Apple III system came with a 0.096 megabytes of memory (twice that of the Apple II…for just $4340!), while the word processor version could store 60 pages of text on a 5 1/2-inch floppy disk. Other improvements included an 80-character upper-and-lower-case display, 16 colors and a 16-tone gray scale, event timers, and a built-in clock and calendar. Unfortunately, these new features couldn’t compensate for the Apple III’s deficiencies, as the line was discontinued in September 1985. Read the full story in Apple III: This Personal Computer Means Business 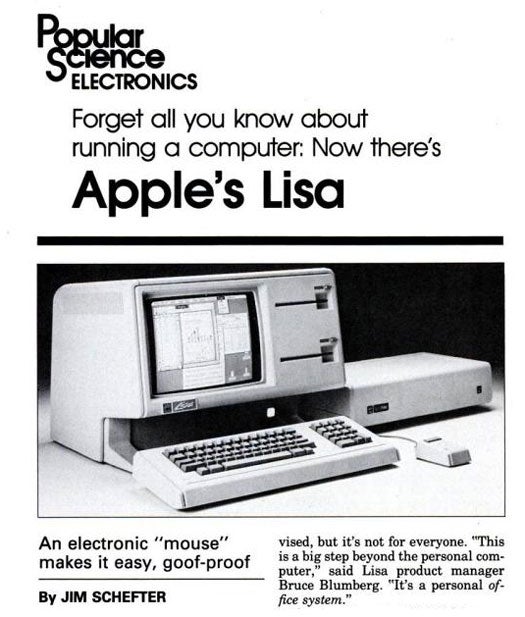 In the late 1970s, a visit to Xerox’s Palo Alto Research Center inspired Steve Jobs to build a computer with a mouse-driven graphic interface. The results were stunning. Despite high price and subsequently quick demise, LISA set an unforgettable new standard for user friendliness. As product manager Bruce Blumberg said, “With Lisa, there’s no concept of programs. You work on documents.” For the first time, users could store files by clicking small icons called “folders.” They could access these documents later by hovering their mouse over a menu bar. They could shrink the page size, stack the pages on top of each other, and lay one document aside (with a simple click and drag) to work on another. Today, these tasks sound pretty basic, but in 1983, they made all the difference to people who were used to typing every command into their machines. “The arrow darted across the video screen, keeping perfect rhythm with the palm-sized device I pushed and pulled over the desk top,” said writer Jim Schefter. “In moments, the idea of controlling an incredibly complex computer with nothing more than hand motion and a single button seemed perfectly natural.” “The computer was Lisa, from Apple. And with it, computers suddenly stop being mysterious, forbidding machines that boggle the brain. Lisa is easy; you’d have to work at it to make a mistake.” Read the full story in Apple’s Lisa 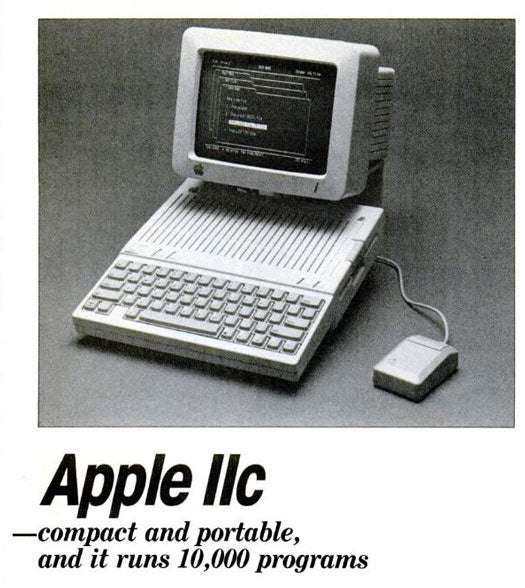 As the company’s first effort at building a portable computer, the Apple IIc was essentially a shrunken version of the Apple IIe. This 7.5-pound machine was designed as an upscale alternative to IBM’s PCjr, which went on to become a commercial failure. The Apple IIc, which sold for $1295, came with 128 KB of memory and a 1.023 MHz microprocessor. It improved on its predecessor by using a text display that could support characters resembling the icons found on machines with a graphical interface. Best of all, the machine was suited to beginners. Since it came with five built-in slot cards, including a Mouse Card and floppy drive controller card, the machine could be used right out of the box. Read the full story in Apple IIc — Compact and Portable, and It Runs 10,000 Programs 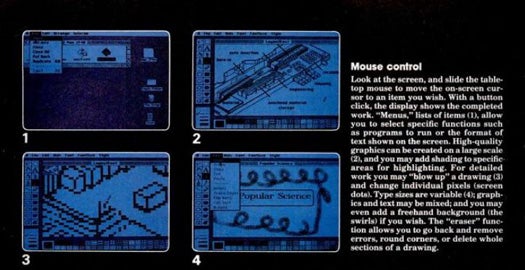 The new 1984 Mac featured the revolutionary “mouse,” also featured on the previous, but unsuccessful Apple Lisa. The idea of a dragging a cursor around a screen using a physical object would change computing forever. Read the story here. 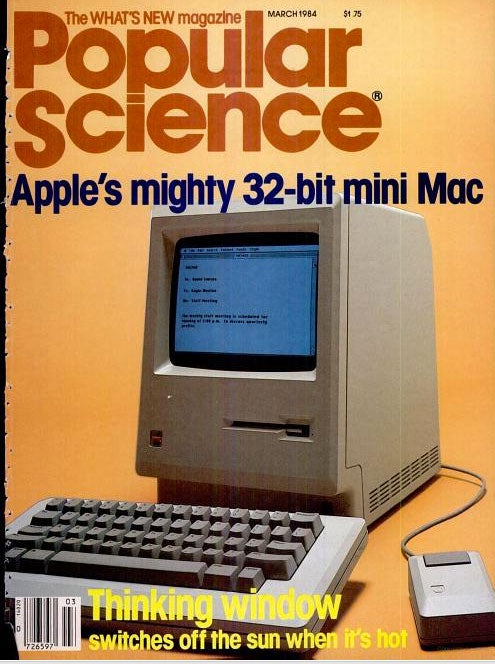 After being removed from the Lisa project, Steve Jobs focused his efforts on the Macintosh, which became the first commercially successful personal computer to use a mouse and a GUI. True, Lisa did it first, but the Macintosh actually found its way into people’s homes, thus becoming more memorable to those who grew up in that era. The Macintosh was not only cheaper to manufacture, but it had the benefit of an iconic marketing campaign. In 1984, Jobs demonstrated the machine in his first Apple keynote event. A commercial directed by Ridley Scott aired during Super Bowl XVIII piqued the public’s interest. To further publicize their product, Apple bought all 39 advertising pages in Newsweek in November 1984. Once people began using the product, they couldn’t imagine returning to textual commands. Clicking and dragging was simple; the desktop, beautiful. For the first time, users could interact with the objects on their screen without having to program any commands. A year later, Apple enabled the rise of desktop publishing by outfitting Macintoshes with Apple’s LaserWriter printer, MacPublisher, and Aldus PageMaker. Read the full story in Apple’s Mighty Mini Mac 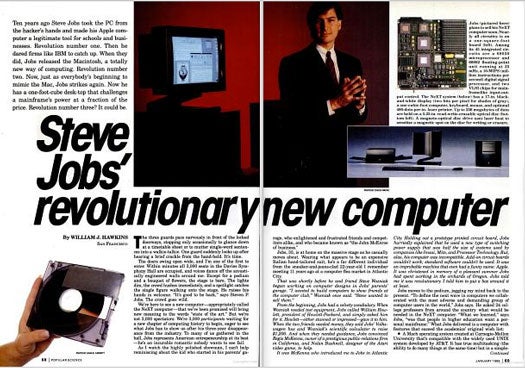 After leaving Apple in 1985, Steve Jobs founded NeXT Computer, which focused on UNIX based workstations equipped with their own operating system. Like the rest of the tech industry, we were intrigued by Jobs’ new venture. Writer William J. Hawkins received an invite to the product’s introductory ceremony, where he wrote, “We’re not 3,000 spectators. We’re 3,000 participants waiting for a new chapter of computing history to begin, eager to see what Jobs has to show us after his three-year disappearance from the industry. To many of us gathered in the hall, Jobs represents American entrepreneurship at its best — he’s an incurable romantic nobody wants to see fail.” As it turns out, Hawkins had nothing to worry about, as NeXt ended up making a huge impact on the market. Not only did Apple acquire NeXT (and thus, Jobs) in 1996, but their operating system became the foundation for Apple’s OS X. And in 1991, Tim Berners-Lee used a NeXT machine to build the first web browser and web server. Read the full story in Steve Jobs’ Revolutionary New Computer 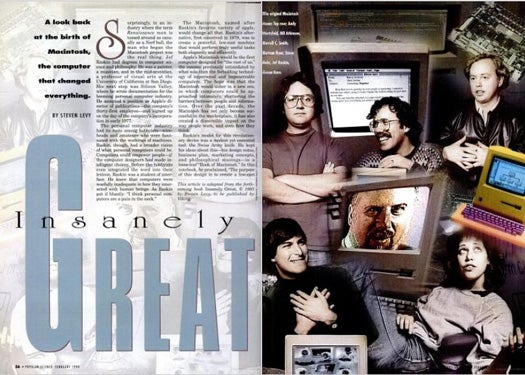 Our retrospective of the birth of the Macintosh computer in February 1994 focused heavily on Jobs. The Mac guru had a knack for innovation, especially in fields he was not formally trained in, such as ergonomics, engineering, and design. Jobs’ management style was just as idiosyncratic, passionate, motivating, and at times, overly critical. Read the story here. 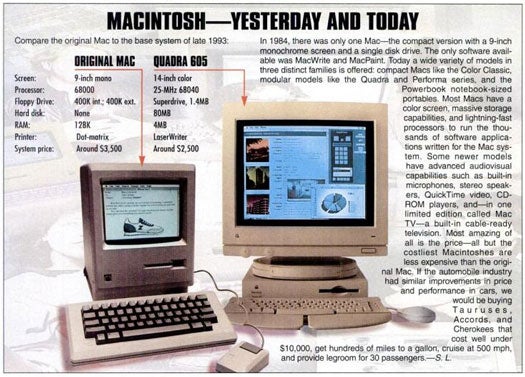 Our 10-year retrospective on Macintosh computers was published during Apple’s Dark Ages. Despite Jobs’ absence during this period, it’s clear that Apple’s machines came a long way in just a decade. In 1984, there was only one type of Macintosh. By 1994, Apple fans could choose from the Quadra and Performa series, the Powerbook portables, and the compact Macs. Sure, most of these products were commercial failures, but it’s interesting to compare Apple’s growth between 1984 – 1994 to its growth between 1994 – 2004. Read the full story in Insanely Great 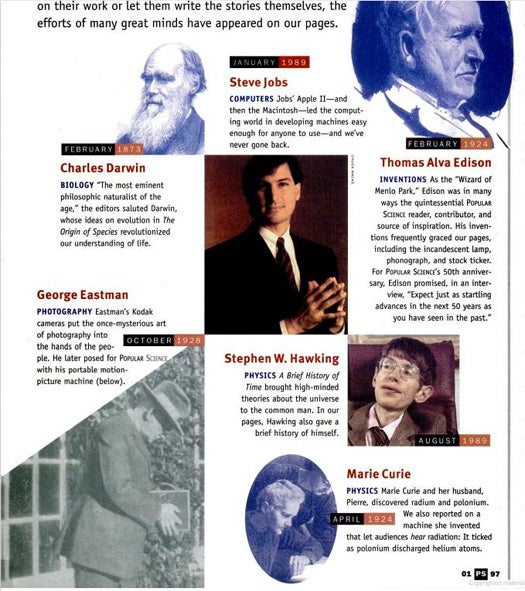 Jobs and the Greats

Jobs graced our pages again in January 1997, with other historical greats we’ve covered over the years. He looks right at home, even cocky, flanked by Charles Darwin, Thomas Edison and Stephen Hawking. Read the story here. 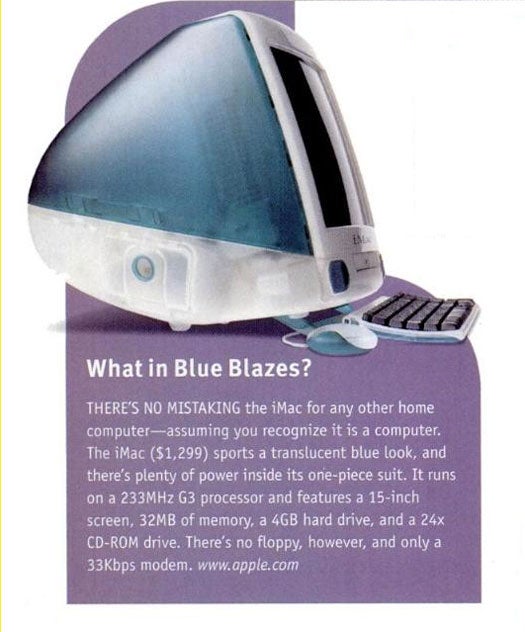 Speaking of growth, compare the 1994 Quadra pictured on the previous slide to the iMac, which arrived just four years later. Jobs gave his products a makeover after returning to Apple in 1996, which made Apple’s computers more recognizable while establishing his status as Silicon Valley’s greatest artisan. The gumdrop design didn’t last long, but those of us who were around in 1998 will remember the iMac’s debut forever. Remember when Jobs encouraged us to collect them all, as if they were Pokemon? (I desperately coveted the blue one.) Read the full story in What’s New, August 1998 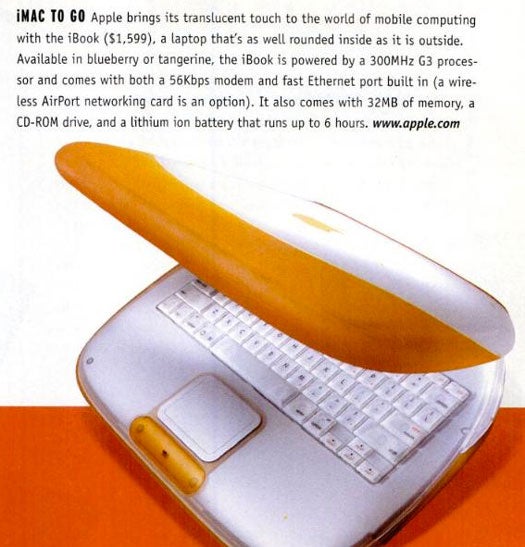 Not to be confused with the app, iBooks were a line of portable computers sold by Apple between 1999 and 2006. The first line, also known as the “Clamshell,” was clearly modeled on the blueberry iMac. Even its slogan, “iMac to go,” suggested a neat (if not funky-looking) synergy between the two products. The iBook G3 came in five colors: Tangerine (pictured on the left), Blueberry, Key Lime, Indigo, and Graphite. The first basic models were equipped with 32 MB of memory and a 300 MHz processor. As you might recall from the keynote announcing this product, the Clamshell iBook also came with a handle. Read the full story in Best of What’s New, July 1999 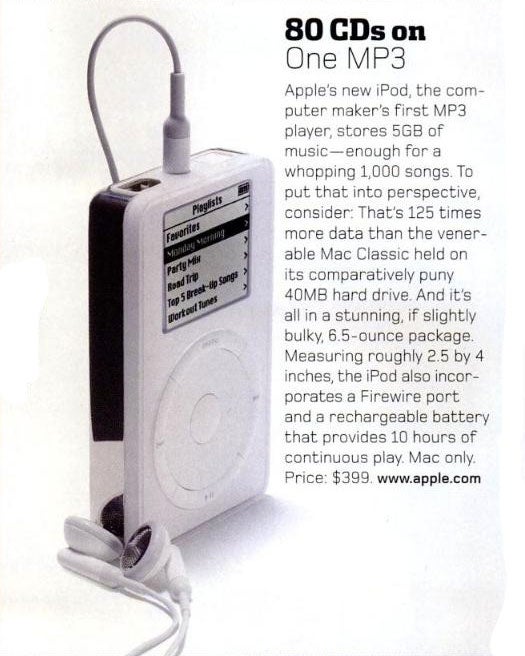 Finally, who can forget Apple’s foray into music? While the iPod wasn’t the first MP3 player around, its cool factor gave people a reason to abandon their good old CDs for digital storage. By then, Apple had a solid reputation as a purveyor of beautiful hardware. The first generation iPod didn’t just serve a purpose — it made a statement. Read the full story in What’s New, January 2002
apples
archives
Mac
steve jobs
Technology