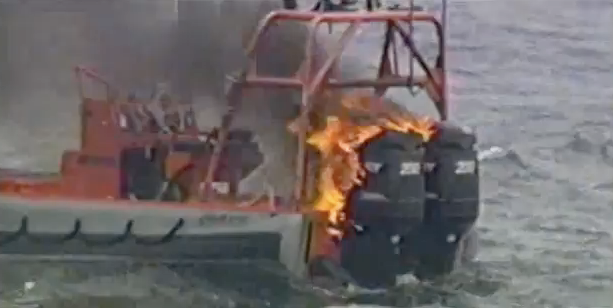 A Navy laser set fire to a small ship bobbing in unruly seas this week, the first at-sea demonstration of one of the Navy’s ray guns.

Check out the Navy’s video of a fire slowly consuming the inflatable boat’s outboard motors.

At times, the turbulent waters seemed ready to swallow the small craft, a testament to the laser’s accuracy even in humid, unsteady conditions. The laser is part of a suite of future Navy laser weapons, which also includes the mega Free Electron Laser death ray.

This test took place Wednesday near San Nicholas Island, off the central California coast, and proves the laser can work in a maritime environment, according to Navy officials. Previous incineration tests all took place on land.

The solid-state, high-energy laser was mounted onto the deck of a self-defense test ship, the former USS Paul Foster, and integrated with the ship’s radar and navigation systems. It fired a 15 kW beam across a mile of open water, but it’s designed to be scaled up to 100 kW, according to builder Northrop Grumman, which has a $98 million laser contract through June 2014.

So far, it’s not powerful enough to take out an incoming missile or warship — that’s up to its larger brethren like the FEL. But it proves lasers can be effective weapons against small ships at relatively close range — like pirate ships, perhaps.