NASA’s intrepid Mercury observer, the Messenger satellite, is about to become the first spacecraft ever to orbit the first planet.... 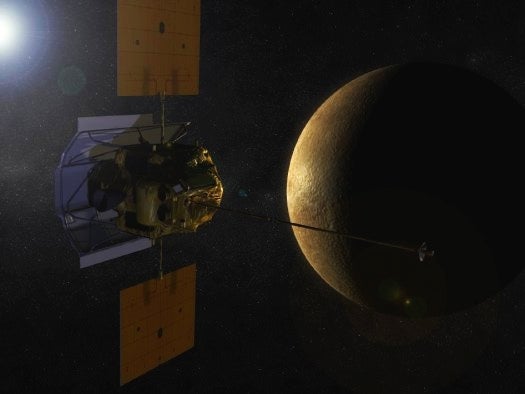 NASA’s intrepid Mercury observer, the Messenger satellite, is about to become the first spacecraft ever to orbit the first planet. The probe, which has already flown past the planet three times, will fire its thrusters March 17 so it can enter orbit and embark on a year-long science mission. Scientists hope the probe will explain several mysteries of Mercury’s past.

When it enters orbit, Messenger will be 96.35 million miles from Earth, according to NASA.

NASA’s Messenger teams have spent six years readying for this moment, sending their probe on flybys of Earth, Venus and Mercury in the first mission to the inner solar system in 30 years.

In the past two years, Messenger has already uncovered plenty of Mercury’s secrets, including never-before-seen pictures of the planet’s surface. The probe also discovered that Mercury has a very thin atmosphere, and found evidence that its magnetic field seems to be produced by a core of molten iron. Mercury’s volcanic past had been a topic of debate since the Mariner 10 probe flew past in the 1970s.

Lots of this data has been incorporated into a Google Earth model of Mercury, which you can learn to use here.

During the year-long orbit, seven science instruments on board will help scientists determine the composition of the planet’s surface. Messenger is outfitted with special shields to help it withstand scorching solar heat — it will be just 28.67 million miles from the sun, which will shine 11 times brighter at Mercury than it does on Earth. Despite its thermal requirements, it’s made of lightweight material, so the small planet’s gravitational pull will be able to pull it into orbit.

Its name stands for MErcury Surface, Space ENvironment, GEochemistry, and Ranging, and is a nod to the duties of the Roman god for which the planet is named.

The insertion burn will use up 31 percent of the fuel Messenger brought to space. Before it could fire its engines, several heaters had to turn on to warm the fuel and bring it to the right pressure — like pre-heating a diesel engine in the winter.

Messenger’s principal investigator, Sean Solomon, of the Carnegie Institution in Washington, said the teams were ready for the insertion burn.

“Orbit insertion is the last hurdle to a new game level, operation of the first spacecraft in orbit about the solar system’s innermost planet,” he said.