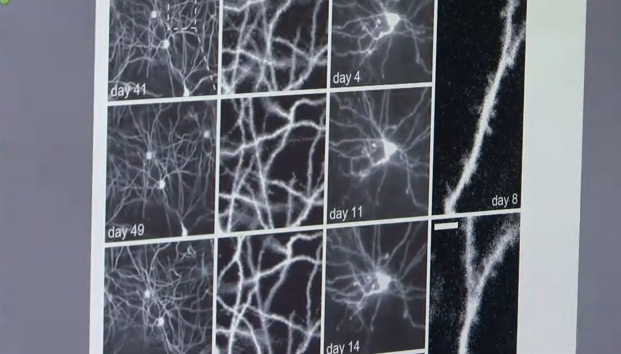 Embedding minuscule glass tubes inside a mouse brain allows neuroscientists to monitor brain activity over long periods of time, watching neurons and tissue change with illness or aging. The method, developed at Stanford University, opens a porthole into the brain’s deepest recesses.

Whole-brain scans like functional magnetic resonance imaging allow scientists to watch brain activity unfold, but they don’t provide the level of detail you might need to watch degenerative diseases or cancer at work. Traditional light microscopes can only go so far, however, penetrating about 1/32 of an inch of tissue before it’s too dark to see. Scientists have been able to peer deeper by using micro-optics, but this is also just a snapshot of one moment in time, and it’s almost impossible to return to the same spot twice. What’s more, the act of taking a peek — shoving a micro-optical device deep into the brain — can cause injury or infection.

Mark Schnitzer, a Stanford biology and applied physics professor, outlines a new option in this week’s issue of Nature Medicine. It starts with implanting tiny glass tubes, about half the width of a grain of rice, into the deep brain of a mouse. Once the tubes are in place, the brain is protected from the outside environment, and scientists can stick a tiny endoscope inside. The glass tube has a window on the end through which scientists can image neurons and monitor them over time.

“It’s a bit like looking through a porthole in a submarine,” Schnitzer said in a Stanford news release.

The technique allows researchers to monitor individual cells as well as changes in individual animals, by comparing healthy tissue to diseased tissue. It could help researchers better understand aggressive brain cancers, for instance, which are known to be more deadly when they start in the deep brain as opposed to the surface. The method could be used for deep-tissue imaging studies in other parts of the body, too, Schnitzer said.

“We’re bringing the power of the microscope to tissues that lie beneath the penetration of light into the brain,” he said.