Wind-, Solar-, and Hydrogen-Powered Ferry to Lady Liberty to be Completed in April

Transportation to some of America’s most iconic tourist destinations will be a little more high-tech and eco-friendly come April. Statue... 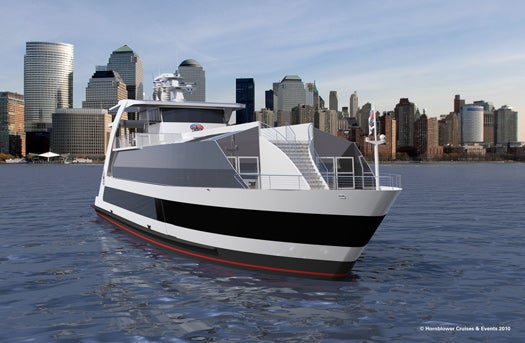 Transportation to some of America’s most iconic tourist destinations will be a little more high-tech and eco-friendly come April. Statue Cruises, which provides ferry service to the Statue of Liberty and Ellis Island, has signed an agreement with Derecktor Shipyards in Bridgeport, Connecticut to create the world’s first hybrid ferry that runs on hydrogen, solar and wind power.

The 1,400-horsepower New York Hornblower Hybrid, capable of carrying 600 passengers, will be equipped with hydrogen fuel cells, solar panels and wind turbines. A proton exchange membrane fuel cell will turn hydrogen into electricity, though the Hornblower will also house Tier 2 diesel engines. According to the press release, these should only be used to cover “additional energy needs,” whatever those are.

Developers also plan to include as many eco-friendly materials as possible in the construction of the vessel, including recycled glass countertops, LED lighting, and aluminum wall coverings in place of wallpaper. With entire football stadiums planning to produce their own energy, one boat may not seem like much, but it is a step towards Statue Cruises’ goal of eliminating emissions entirely from its ferry services.