Video: Spot the Robot Performer in This Delicate Dance Troupe

Japan’s HRP-4 robotic pop star has been hogging the spotlight lately, honing her singing style and making appearances at CEATECH... 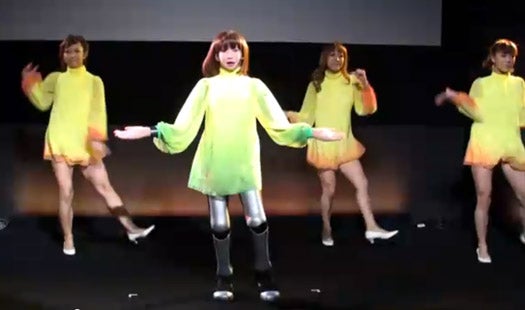 Japan’s HRP-4 robotic pop star has been hogging the spotlight lately, honing her singing style and making appearances at CEATECH JAPAN and more recently at the Digital Content Expo in Tokyo. But this time she’s performing with her own crew of backup dancers, which very well could make Divabot – as she’s sometimes known – the first robot to headline a musical performance with support from a human dance troupe.

Alright, so it’s a distinction of dubious grandeur. But the robot is notching some pretty impressive achievements in the field of robotics. Her creators at the Institute of Advanced Industrial Science and Technology have developed programs that not only allow her to mimic a real human singers vocal performance, but also her facial tics and gestures as she sings. The result is a humanoid that, while still creepily robotic, is learning to be outwardly more and more like her human counterparts.

That’s not even taking into account the fact that she’s got moves. Check out this weekend’s performance from two different perspectives below.