In Demonstration, Laser-Powered UAV Charged From the Ground Stays Aloft For Hours

An unmanned aerial surveillance drone is only as good as its power source, and as such many technologies are being... 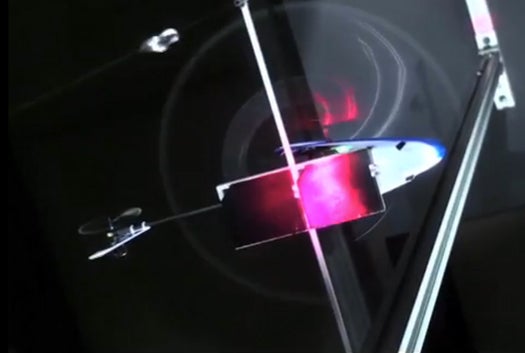 An unmanned aerial surveillance drone is only as good as its power source, and as such many technologies are being considered that could drastically extend the duration of drone missions – for instance, DARPA’s Vulture program has helped develop a giant solar plane that, theoretically, could fly for five years straight. But Seattle-based LaserMotive thinks laser power is the answer, and to prove it they recently kept a tiny 22-gram helicopter aloft for hours by beaming power to it via a laser.

LaserMotive knows a thing or two about turning laser power into mechanical energy; last year the firm beamed energy to a robot that climbed nearly 3,000 feet up a cable suspended form a helicopter, a feat impressive enough to win $900,000 from NASA. Now LaserMotive is demonstrating that similar ground-based lasers could beam energy to either fixed-wing or hovering rotary-wing UAVs high in the sky, keeping batteries topped up with juice so that they never have to land, with flight durations limited only by the durability of the aircraft’s motors.

Take the tiny laser-powered helicopter. LaserMotive kept the aircraft aloft for six hours at last week’s AUVSI Unmanned Systems Conference in Denver using a 7-centimeter beam of near-infrared laser that automatically tracked the helicopter as it moved up and down. The helicopter eventually failed, but only when the motor gave out. The laser never stopped beaming energy.

Better motor tech could lead to unmanned systems that fly missions that last days or weeks, powered by ground based energy beams that keep them running indefinitely. Portable UAV systems could allow troops operating at forward operating bases to send small surveillance platforms skyward to hover overhead, giving them an eye in the sky over their temporary quarters. Troops on the move could feasibly keep drones aloft above their convoys, powered from lasers mounted on the vehicles.

Of course, we could also just use lasers to blast UAVs out of the sky.