It can be very difficult to coax every individual on a soccer squad into stepping up the level of play... 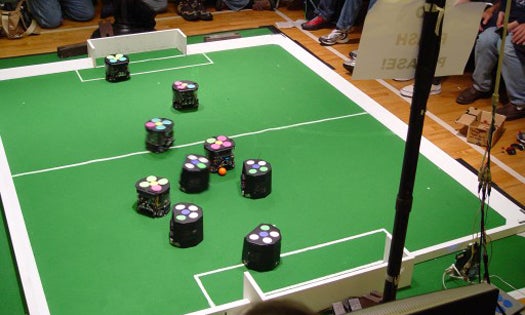 It can be very difficult to coax every individual on a soccer squad into stepping up the level of play all at the same time (just ask Australia’s World Cup team). But at the RoboCup, the American team is doing just that, using a new physics-based algorithm that helps their footballing ‘bots not only execute plays but to anticipate where the action on the field is likely to unfold next.

Developed at Carnegie Mellon University’s Computer Science Department, the team of American robots was designed to compete in the RoboCup, an annual tournament for soccer bots that aims to develop autonomous humanoid robots that can defeat the best human players by 2050. The current crop of robots are nowhere near that goal, playing on a very tiny pitch that they roll, rather than run, up and down.

The bots are controlled via a computer that watches from a camera above the field, and that camera is charged with positioning one of the five team America robots on the ball at all times. But where the robots used to play a purely reactive game, the new algorithm gives them a sense of where the ball will go next on both offense and defense. For instance, while dribbling the bots have a sense of when they might lose control of the ball and can compensate, giving them an edge over robots that can only react after the fact.

But the real value of the algorithm goes beyond helping small robots play a meaner match of soccer. Understanding ball dynamics and spatial mechanics mimics a human player’s real intuition for where the ball is going next. That’s a characteristic that not only mirrors real skills necessary to play soccer, but it brings researchers incrementally closer to creating the kind of machine intuition that could lead to true artificial intelligence, or at the very least a humanoid robo-Renaldo.

Watch the physics-based algorithm dominate below.