As Zombiesat Approaches, Other Satellites Have to Flee Along Intricate Paths

Remember that zombiesat that stopped taking commands from the ground last month? It’s plodding toward its first potential victim, a... 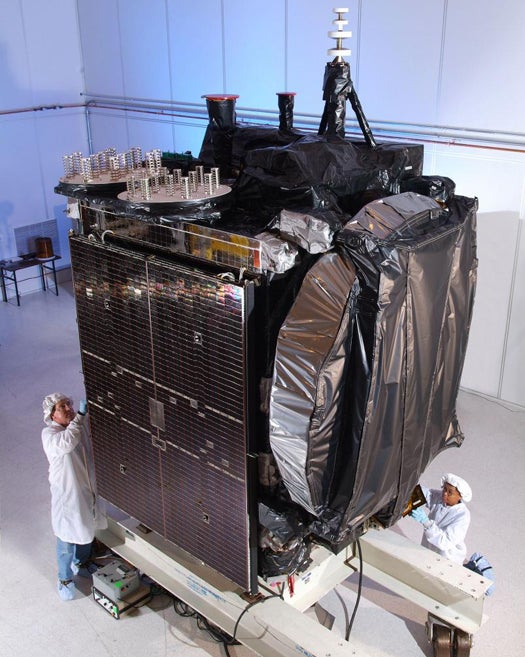 Remember that zombiesat that stopped taking commands from the ground last month? It’s plodding toward its first potential victim, a television satellite called AMC-11. As a result that satellite’s operator, SES World Skies, is choreographing an intricate, unprecedented orbital maneuver that will shift AMC-11 out of harm’s way and bring in a second satellite behind the wandering Galaxy 15, which lost touch with handlers on Earth on April 5.

“A maneuver of this nature and complexity — I’m not aware of anyone having done this before,” the chief technology officer of SES told the BBC.

The risk of a satellite collision is extremely low, but service providers are worried about interference. Galaxy 15 is still a fully operational satellite capable of bouncing any signal it receives back down to Earth at full strength. Unfortunately, the so-called Zombiesat has stopped listening to commands from Earth and is drifting slowly across the sky at gravity’s whim. If it wanders too close to other satellites, it could start picking up and re-broadcasting those signals, which could potentially cause massive headaches down here on the ground (Think: your television goes black in the middle of Glee).

SES World Skies is worried Galaxy-15 is passing a bit too close to AMC-11, so they’ve initiated a drift mimicking that of the zombiesat to maintain a safe distance. It’s also scrambling a second satellite, SES-1, to come in behind Galaxy 15 to ensure continuous service for its customers until Galaxy 15 passes, bound for one of the Earth’s libration points — orbital boneyards where increased gravity causes space junk to accumulate.

That in turn will lead to additional choreography on the ground as programming services swap back and forth between the two living satellites until AMC-11 can return to its usual post. Meanwhile, Galaxy 15’s handlers at Intelsat will continue to reach out to the wayward satellite. We’re crossing our fingers for them, but we can’t be too optimistic. Negotiating with zombies rarely ends well.