In late 2008, NASA’s Phoenix lander dropped into deep hibernation at the onset of Martian winter, concluding a successful and... 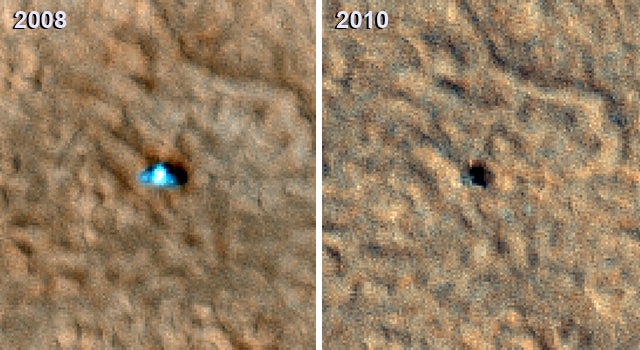 In late 2008, NASA’s Phoenix lander dropped into deep hibernation at the onset of Martian winter, concluding a successful and long-running mission. But there was some hope that, despite not being built for such hostile temperatures, the craft would emerge from the thaw with a pulse. A final checkup from the Mars Odyseey orbiter circling overhead last week, however, has erased all hope–Phoenix’s solar panels have been frozen off. It’s dead.

This photo, taken by Odyssey’s orbiting companion, the Mars Reconnaissance orbiter, clearly shows a dark shadow where Phoenix’s reflect-y solar panels used to be. Hundreds of pounds of ice were projected to build up on the craft over the winter, which proved too much for its solar panels to maintain structural integrity.

Earthly research continues on the wealth of data Phoenix sent back, including some of the most detailed findings relating to water ice beneath the Martian planet’s soil. Phoenix’s proudest moment was the discovery of perchlorate in the soil, which can act as a sponge, sucking up water in the atmosphere and feeding it to any number of microbes that thrive on it here on Earth.

Mars Science Laboratory, also known as “Curiosity” will follow in Phoenix’s footsteps when it touches down on the surface toward the end of next year.