Autonomous Oceanic Modules Could Self-Assemble Into Pirate-Fighting Bases, Like Legos 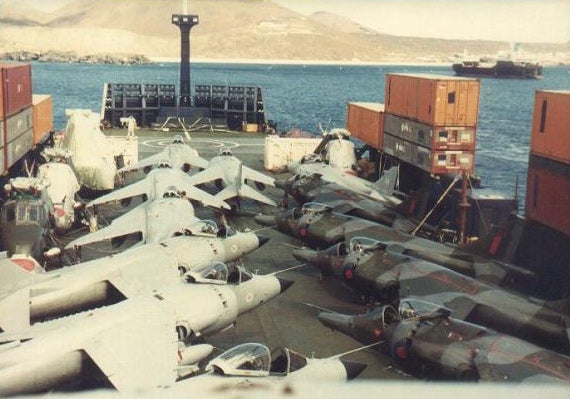 A floating container vessel used by the UK during the 1982 Falklands War. via The Register
SHARE

Warships are limited in their ability to patrol vast areas of ocean against pirates, but a modular, self-assembling floating platform delivered by cargo ships could provide a cheaper naval base for military forces. The futuristic twist on a heritage technology comes from none other than the Pentagon’s DARPA, The Register reports.

The Tactically Expandable Maritime Platform (TEMP) would turn the standard ISO containers carried by cargo ships into modules that each serve a specific purpose, such as living quarters, command cells, comm shacks, or weapons stations.

Once deployed by cargo ship, the self-propelling modules would use low-level computer brains to assemble themselves into a larger structure. Researchers have already toyed with such autonomous technology in robot demos on land.

The floating armada could house everything from Marine boarding teams and U.S. Navy SEALs to helicopters and unmanned drones in sea and air. That could prove far more cost-effective for fighting, say, Somali pirates off the Horn of Africa as opposed to the current thin line of expensive frigates and destroyers.

Naval forces have stretched themselves thin in recent years, and with mixed success at best. Armed guards aboard a Panamanian cargo ship had to repel yet another Somali pirate attack today and managed to kill one intruder, according to BBC.

The modular Lego base idea seems to represent a hot new trend, considering that the U.S. Marines are also independently deploying an armored wall system to create forward-operating bases in Afghanistan. But this seems a lot cooler than any Lego pirates base that I built as a kid.