Scientistsu, engineers, and doctors yearn for tiny sensors to record a vast array of events in the world’s many hard-to-reach... 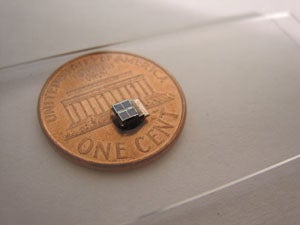 Scientistsu, engineers, and doctors yearn for tiny sensors to record a vast array of events in the world’s many hard-to-reach places. And so far, the tradeoff between battery life and size has prevented sensors from becoming small enough to fit unobtrusively in the human body, or inside very small machines. Now, University of Michigan researchers seem to have solved that puzzle by creating a chip that draws energy through solar power, heat, or movement. By forgoing a large battery for perpetual environmental power, the U of M scientists managed to produce a sensor 1,000 times smaller than any other similar device.

The chip uses a standard ARM Cortex-M3 processor, with a startlingly novel power plant. The sensor switches into and out of sleep mode regularly, and (in the prototype) draws in new energy through tiny solar panels. By combining energy frugality with opportunistic harvesting, the sensor only needs one nanowatt of power to operate. And by keeping energy usage low, the U of M scientists could afford to shrink the sensor down to a tiny 0.10″ by 0.14″ by 0.03″.

Thus far, the researchers haven’t developed any specific applications for the sensor platform, but already imagine it being deployed within the body to measure pressure in the head and eyes, in huge arrays in the wild to measure environmental disturbances at a very high resolution, or in the water supply to measure levels of contaminants.