For conscious, biological beings, walking comes easy. But the process of lining up one step after another across varying and... 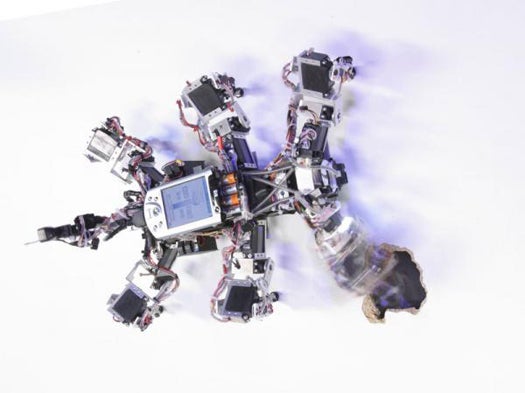 For conscious, biological beings, walking comes easy. But the process of lining up one step after another across varying and uneven terrain is no stroll through the park. Just ask a prosthesis tech fitting a fabricated leg to an amputee or a roboticist trying to teach a humanoid robot to walk; recreating human gait and all the variations thereof is a huge technical challenge. To that end, researchers in Gottingen, Germany have developed a six-legged walking robot that can autonomously switch between different gaits depending on terrain and conditions.

The scientists created the dextrous ‘bot by simplifying the complex processes that occur in the human brain as it performs recurring movements like walking. In the brain, neural circuits called “central pattern generators” (CPGs) control these motions, taking in sensory data, determining a pattern in the input and generating the proper response. In walking robots, a separate CPG is generally needed for each gait; sensors deliver environmental data to the robot, and it selects a CPG appropriate for the necessary gait.

The Gottingen team simplified the process by creating a single CPG that generates varying gaits and can flexibly switch between them. The key is “chaos control” — when not controlled, the CPG simply churns out a chaotic pattern of activity, but given sensory inputs it narrows down the chaotic activity into movements appropriate for for a particular environment. In this way, it generates gaits unique to a given set of sensory data.

Put another way, the computer will randomly test a chaotic group of movements, narrowing them down to the combination of movements that produce the highest level of efficiency. What’s more, the robot can learn the relation between a certain input — say, an incline — and the gait that works best for that input, so the next time it approaches an incline it can go directly to the most appropriate gate. Next up, the researchers plan to add a motor memory device, granting it the foresight to plan movements ahead of time and maintain a gait even after an obstacle is out of sensory range.