Video: IBEX Spacecraft Produces First Full Map of Where We Are in the Galaxy 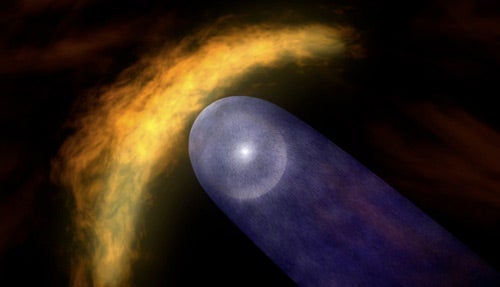 Lost galactic hitchhikers can now rejoice when they visit our corner of the Milky Way. A new sky map created by a NASA spacecraft shows the boundaries of our solar system in comparison to the rest of the interstellar neighborhood.

The boundaries are defined by our sun’s heliosphere — a protective bubble created by the solar wind that travels outward and collides with incoming interstellar radiation. That typically invisible boundary became visible through energetic neutral atoms created in the region that speed toward the sun at velocities ranging up to 2.4 million mph.

The new IBEX map has already revealed a new ribbon of energy in the interstellar boundary region. That band of bright emissions somehow went undetected by the twin Voyager spacecraft that continue to travel outwards through the boundary.

“The Voyagers are providing ground truth, but they’re missing the most exciting region,” said Eric Christian, the IBEX deputy mission scientist at NASA’s Goddard Space Flight Center in Greenbelt, Md. “It’s like having two weather stations that miss the big storm that runs between them.”