How bad are Christmas trees for the environment?

Artificial trees can actually be a smarter choice in certain scenarios. 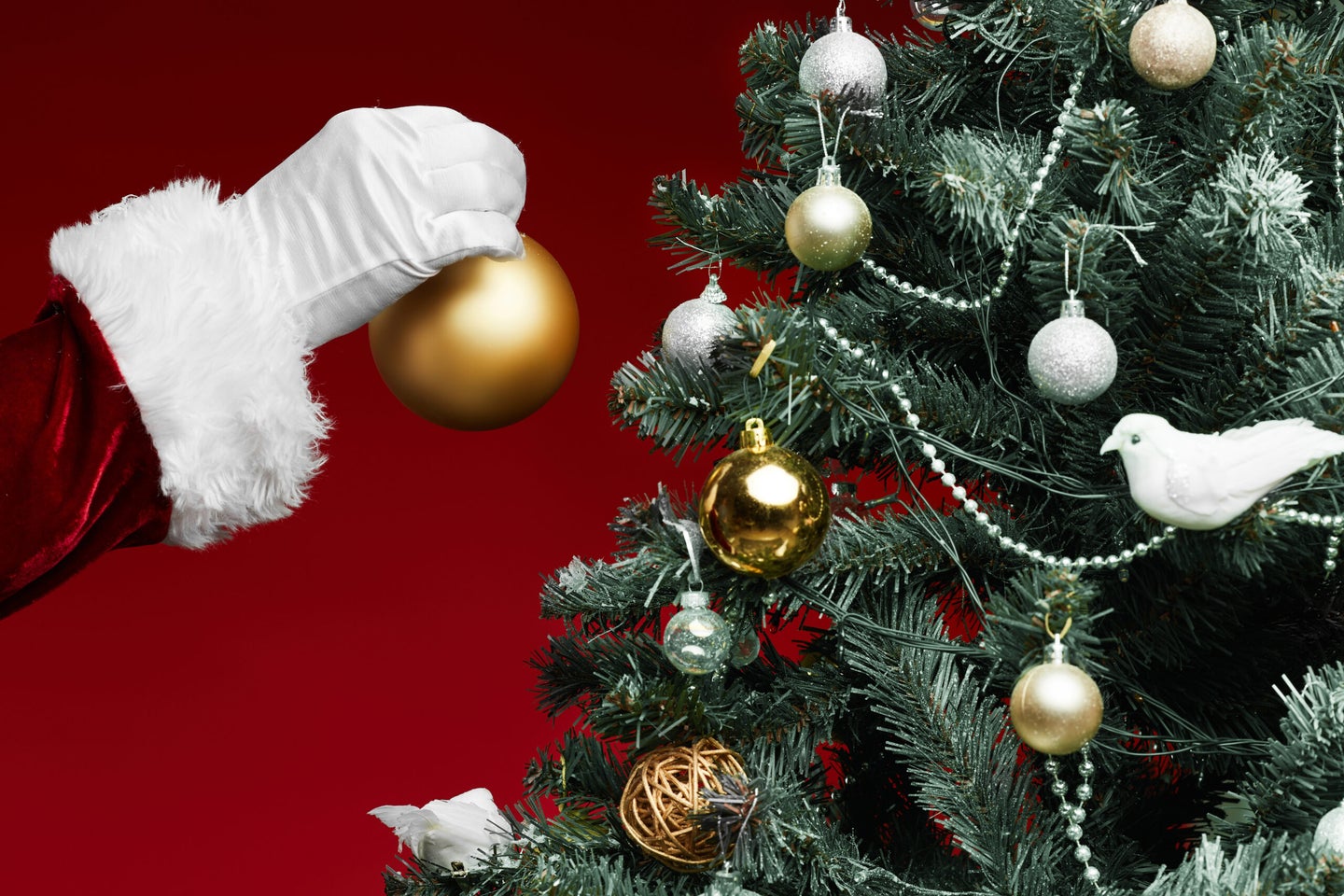 The holidays have a big environmental footprint. DepositPhoto
SHARE

Sparkling lights. Festive nights. For many revelers, Christmas just wouldn’t be Christmas without a live tree. But just how much of a toll does this holiday habit take on the environment?

The answer is surprisingly complicated, but let’s start at the very beginning. Christmas trees are grown on about 15,000 farms in the United States, estimates Doug Hundley, a spokesperson for the National Christmas Tree Association, and last year consumers bought about 32 million of them. The majority of trees—79 percent of the annual harvest—hail from Oregon and North Carolina. Others come from places like Michigan and Pennsylvania—and all of them make a long (and sometimes hair-raising) journey from seedling to seasonal decoration.

Seeds are harvested from existing trees at a hefty premium, then babied in a nursery. Once seedlings reach a foot tall, they’re transplanted onto tree farms, where they spend up to a decade growing up. The majority of farms are relatively small; in 2017, for example, most farmers grew trees on 10 acres or less.

But that doesn’t mean Christmas trees aren’t big business. In November, that year’s trees are cut down by chainsaw-wielding workers. On large farms, the felled trees are then plucked from the field by helicopter pilots who fly them over to waiting trucks to prevent them from breaking or being soiled on their way to market. The trees then make their way to lots or big-box stores, though nearly a third of sales happen on farms themselves through choose-and-cut events.

Like any commodity, Christmas trees rack up an environmental toll—and not just because we use gas-guzzling helicopters and trucks to give them a lift. Fertilizer and pesticide use are the main culprits. “There is pesticide use across the board,” says Lynn Wunderlich, a farm advisor from the University of California Cooperative Extension in California’s central Sierras.

Christmas tree farmers use integrated pest management (IPM), which combines pest identification and monitoring with pesticide use. Growers identify pests and natural predators in the field and use pesticides only when needed to maintain balance between the two. They also increasingly select pest-resistant trees; once-exotic European species like Nordmann and Turkish firs are becoming more popular because they hold up against certain fungi and bugs.

Another much-used Christmas tree pesticide is more controversial: glyphosate, also known as Roundup. The herbicide has been linked to everything from cancer to the evolution of superweeds, but Christmas tree farmers use it to control growths that compete with seedlings, and to “mow” the walkways between rows of trees. However, they use relatively small amounts of the herbicide—the goal is to suppress weeds, but not kill them. Maintaining some ground cover between trees deters other botanical interlopers like thistles and crabgrass and prevents soil erosion.

Wunderlich says that since Roundup is applied in such small quantities—and not to the trees themselves—consumers don’t have to worry about pesticide residue at the time of harvesting; furthermore, consumers who cut down their own trees or buy from farmers who use no pesticides sometimes complain about “honeydew,” a sticky liquid secreted by aphids in infected trees. Bottom line, says Wunderlich: “Christmas trees have pest problems.”

Whether they require lots of water depends on where they’re grown. In California, Christmas tree farmers use drip irrigation. The trees “use more water than a vineyard but less water than a tree fruit—and much less than almonds,” Wunderlich says. In North Carolina, says Hundley, “We don’t irrigate. We just take our chances.” Though the trees get watered during their first year, North Carolina farmers rely on nature to do the rest. That means dry weather can occasionally wipe out large numbers of trees, but the strategy conserves resources in the long run.

But trees don’t just take away; they also give us a gift while they’re growing. Like other plants, Christmas trees capture carbon dioxide and store it in their branches, roots, and needles. However, sustainability consultant Ellipsos notes that the exact amount of carbon sequestration can vary with environmental conditions, like rainfall and soil content.

So which kind of tree is easier on the environment? “Artificial trees have major environmental impacts,” says Wunderlich. Unsurprisingly, Hundley agrees. “You know, most of the artificial trees are made in China. They’re plastic and metal and they end up in our landfills.”

But the reality is that the impacts of both vary depending on how far you travel to get your tree, whether you recycle or throw in the trash, and, if it’s artificial, how long you reuse it for. It’s absolutely possible to keep a fake tree in the family long enough that it becomes more environmentally friendly than a natural one, in terms of resources used and greenhouse gasses emitted. But that assumes a sturdy product you commit to using year after year. And a natural tree has far greater potential to give back once it’s done providing you with Christmas cheer: Trees that are mulched literally turn into soil, helping grow new plants and sequester more carbon. In contrast, the only place artificial ones can go is into the trash.

To get the greenest tree possible, Wunderlich suggests getting to know your local tree farmer. “The best thing is to go to a local farm,” she says. “Buy local, stay local.”

Still prefer an artificial tree? No need to punish yourself—but get ready to make a long-term Christmas commitment. If you extend the life of your fake tree to 20 years, Ellipsos writes, you can reduce your environmental impact. In fact, the report suggests that if you have to travel more than 10 miles to get your tree you might be better off with an artificial one you can purchase closer to home.

If you do buy a live tree this year, savor it. Climate change, with its increase in severe weather and ever-morphing growing conditions, could one day send yuletide evergreens out of fashion. “It’s something the next generation may have to deal with,” says Hundley.

That’s all the more reason to slow down, celebrate the holiday, and recycle your live tree if possible. And no matter your preferred plant, Ellipsos suggests an easy way to offset the product’s impact: For a guilt-free tree, carpool or bike to work between one and three weeks a year.