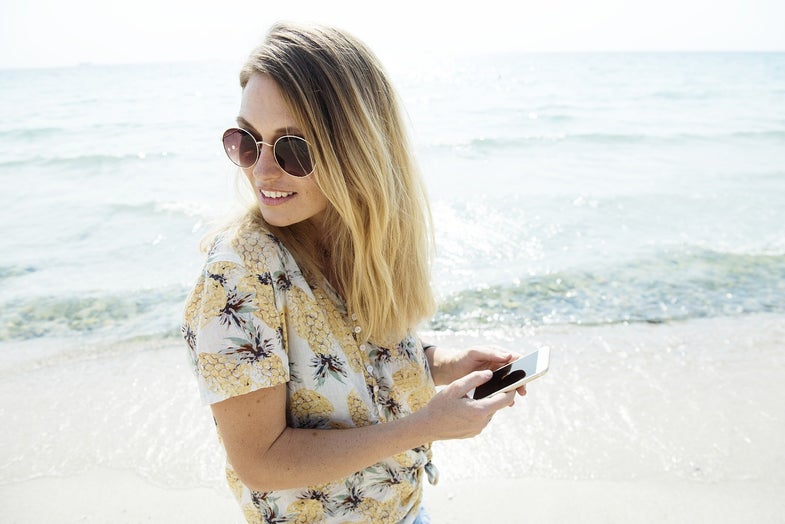 The sun is returning for another bright summer, which means it’s time to relax and read by the pool. So you pull out your phone, don your shades, and…you can’t see a thing on the screen. What gives?

This annoying phenomenon happens with all kinds of electronics, including phones, tablets, and computer monitors. Even with the brightness cranked up, the display appears dark, purple, or in some cases, completely black when you wear sunglasses. The culprit? Polarizing filters.

You’ve probably heard of polarized sunglasses before, but to solve the problem, it’s important to understand why this “black screen” phenomenon occurs when you’re wearing them. (Don’t care about the science? Skip to the end of this article for the quick fix.)

Light is made of particles called photons, which travel through space like a wave, zig-zagging back and forth on their way to your eye. Natural, unpolarized light consists of photons bouncing in many directions at once. But as soon as they strike certain types of reflective surfaces—like a body of water or an asphalt road—those waves will all begin vibrating in one direction, usually horizontally. This is what causes the intense glare that hurts your eyes when you look at sunlight on a lake.

Polarizing filters absorb light waves that vibrate along a certain axis. In the case of polarizing sunglasses, they absorb the horizontally-vibrating waves. That means that only vertically-vibrating waves get through the filter and reach your eye. This reduces the intensity of reflective glare without blocking too much of the surrounding light. 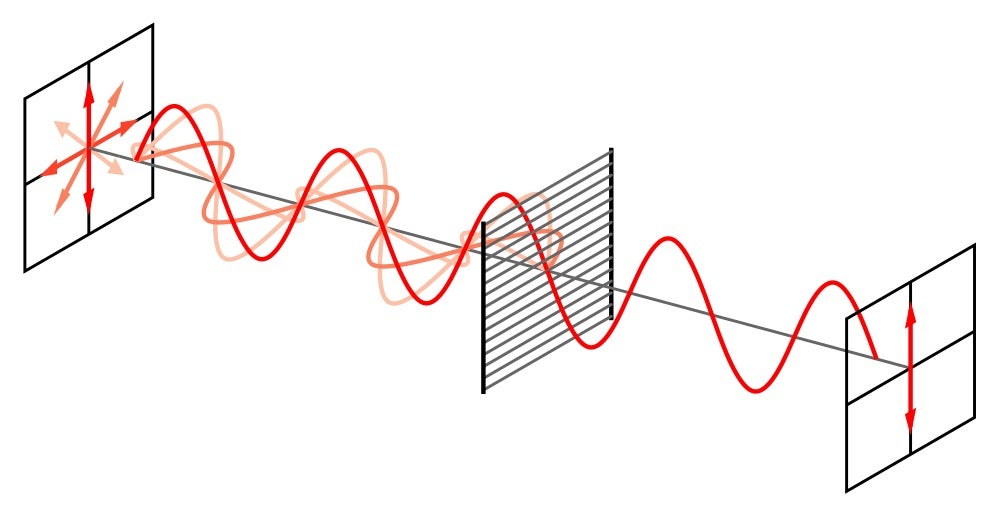 In certain sunglass lenses, polarized filters block all of the light waves except for the ones that are vibrating vertically.

Polarized lenses don’t just cut down on glare; they also protect the long-term health of your eyes. “Everyone should be wearing polarized sunglasses for maximum eye protection from UVA/UVB rays,” says Purnima S. Patel, clinical spokesperson for the American Academy of Ophthalmology.

How to see your screen without removing your shades

Your gadgets contain polarizing filters, too. “These LCD screens are polarized to reduce glare, especially in bright sunlight—but so are sunglasses,” Patel says. “When the filters for the screen and sunglasses align in opposite directions, the light emanating from the screen with be cut out.” In other words, if the screen emits horizontally-vibrating light, and your sunglasses block all except vertically-vibrating light, no photons will get through and you’ll be stuck with a dark or entirely black image.

Some devices will experience this effect worse than others. Although a lot of higher-end devices have found ways to get around the issue altogether (like the current generation of iPhones, iPads, and Google Pixel phones), you’ll still notice it to some degree on many phones and tablets.

Thankfully, there’s an easy fix: Turn the screen 90 degrees in either direction. This will align the polarizing filter on your screen with the one on your sunglasses, and the light from your screen will be able to pass through to your eyes.