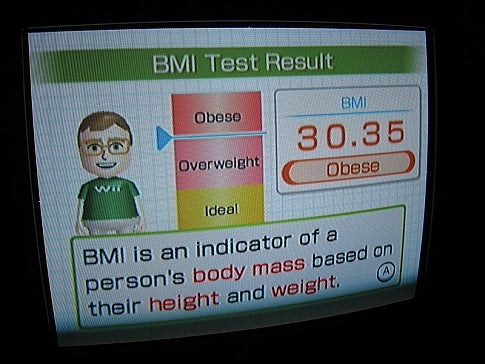 Will the Wii Fit one day add heart rate to the health metrics it monitors? It’s possible; but Nintendo might have to purchase the intellectual property. A patent application filed in early 2007 discusses using a Wii-like controller to monitor body temperature, heart rate, or even blood pressure. The patent was filed by Kent Hsu of Taiwan. Check out the first claim below. How’s that for a run-on sentence?

“1. A wireless controller for a video game console, comprising: a main body including a measurement unit including a control circuit including a first amplification circuit, a control IC, a second amplification circuit, an ADC, a display circuit, and a plurality of pins for setting, a top recess, a display, two first measurement devices adapted to contact the fingers as the hand holding the main body for measuring pulse and body temperature of a user playing a video game on the video game console, and a rotation counter for counting the number of rotations of the main body;a control unit mounted in the recess;a band including two second measurement devices for measuring blood pressure and pulse of the user respectively by wrapping the band around the wrist; anda cable interconnecting the main body and the band,wherein the first measurement devices converts the measured pulse and body temperature into first signals which are sent to the first amplification circuit for amplification, and the amplified first signals are sent to the control IC;the second measurement devices convert the measured blood pressure and pulse into second signals which are sent to the second amplification circuit for amplification, the amplified second signals are sent to the ADC for converting into digital signals, and the digital signals are sent to the control IC;the rotation counter sends the count to the control;the control IC sends the received first signals, the second signals, the digital signals, and the count to the display circuit for processing into corresponding data representing blood pressure, pulse, and body temperature values; andthe blood pressure, the pulse, and the body temperature values are sent to the display for display.”