Just months ago, North Korea set the Japanese and American militaries on alert with its ill-advised, and failed, attempt to... 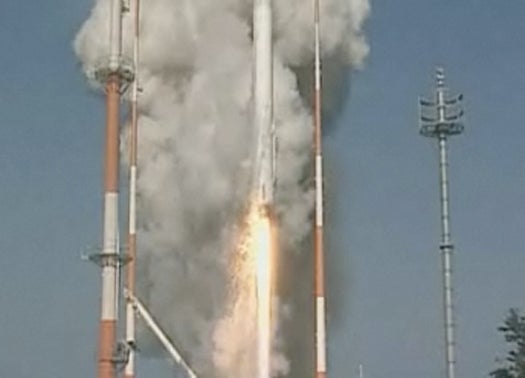 Just months ago, North Korea set the Japanese and American militaries on alert with its ill-advised, and failed, attempt to send a payload-bearing rocket into space. This morning, a much friendlier South Korea succeeded in doing exactly that, though the research satellite that South Korea Space Launch Vehicle-1 was ferrying failed to find its intended orbit.

The two-stage Naro rocket, kept earthbound through four years of delays, launched from South Korea’s space center on Oenaro Island, 290 miles south of Seoul, following an aborted attempt last week resulting from a technical glitch in one of the launch vehicle’s high-pressure tanks. The rocket, built with Russian assistance, was carrying a South Korean-made satellite. For reasons that are still unclear, the satellite separated from the rocket at an altitude of 220 miles. The two were intended to separate just shy of 190 miles. Russian scientists are working with the South Koreans to diagnose the problem.

South Korea’s space ministry termed the launch a “partial success,” as this was the first South Korean rocket launched from the nation’s own soil, though the country has launched 11 satellites via foreign-made rockets from international sites. This morning’s failed satellite, which did separate from the rocket normally even though it was past its orbiting altitude, was intended for oceanic and atmospheric research.

South Korea is striving to become a regional space power along with neighboring China, India, and Japan, and officials hope the launch will raise its visibility among other space-traveling nations. The country plans another launch in April, and is working toward sending an unmanned probe to the moon by 2025. North Korea has not responded to news of the launch.