The DoD wants to take a page from the axolotl's book 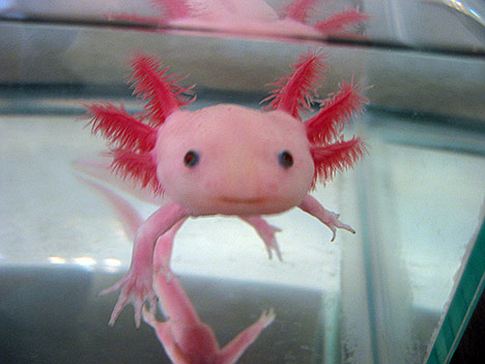 Nip off the leg of this little axolotl salamander, and he grows it right back. The beasts’ regenerative powers extend to their limbs, skin, jaws, those feathery antler-gills on its head, and even parts of its nervous system and brain. Now the U.S. Department of Defense has allocated $6.25 million to research how it does its thing, and whether we can do the same.

With hundreds of soldiers coming home minus a limb or two, the DoD would dearly like to find an easy solution for regenerating body parts, and the axolotl may well hold the key. Quoted by Reuters, Elly Tanaka, of the Center for Regenerative Therapies in Dresden, says that injured axolotls “can go into kind of a mode where they repeat the process of the embryo,” growing body parts again just like they did the first time.

At the Center in Dresden, scientists are mapping the salamander’s genome, which is 10 times larger than humans’, to contrast their healing strategies with ours. When an axolotl is hurt, its wound is swiftly covered with a stem-cell-like growth, which in time sprouts the new foot, nose, or whatever.

Last year in Scientific American, an article on salamander regeneration predicted it may be “only a decade or two away from a day when we can regenerate human body parts.” The axolotl’s future is not quite as bright, perhaps; despite its Wolverine-like regenerative abilities, it is seriously threatened with extinction.