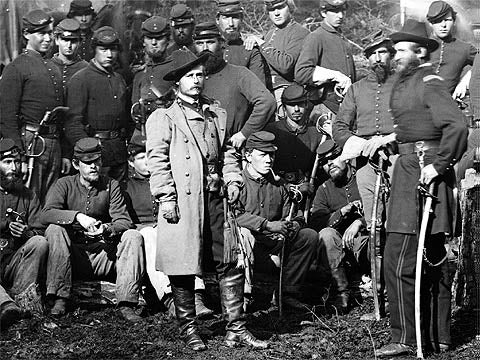 No experiment can ethically test how humans behave in life-or-death situations. But two UCLA economists dug up the records of 41,000 Union soldiers from the American Civil War to see how men of shared or different backgrounds fared in the worst conditions.

They found that sharing common characteristics with fellow soldiers made all the difference in lowering desertion rates, not to mention surviving the horrors of prison camps. The least diverse companies still had one-third fewer desertions than even more diverse companies with higher morale or stronger commitment to the cause.

“Union soldiers, whether in prison camps or in the field, were the most loyal to men who looked like themselves — of the same ethnicity and occupation, from the same state or hometown, or of the same age or related by blood,” said Dora Costa, a UCLA economics professor and co-author of the book Heroes and Cowards: The Social Face of War.

Military history makes much of diverse bands of brothers forging bonds of fellowship under fire. However, Costa and co-author Matthew Kahn argue that preexisting social connections and common characteristics triggered a “hardwired” sense of loyalty.

Soldiers from the least diverse companies not only held together better, but also had higher survival as prisoners. For instance, the infamous Confederate camp called Andersonville had a nearly 40 percent death rate among its Union prisoners. Irish-born soldiers improved their survival rates from 60 percent to 64 percent if imprisoned with 15 men from their original company – but saw 90 percent survival rates if those 15 comrades were also fellow Irish immigrants.

“We believe that your comrades would help you get healthy if you got sick and share their food rations,” Kahn said. “So in P.O.W. camps, diversity actually turned out to be a bad thing. It hindered survival rates.”

The economists drew their data from the National Archives under an NIH-funded study. They focused their research on the Union Army because of extensive medical records that tracked many veterans into old age, unlike the Confederate Army records.

Such a retrospective study may not provide perfect experimental conditions for observing human behavior, but it does provide intriguing clues about social links and[. An individual soldier’s best chance for survival lay with desertion, but fear of social censure and shame could override that in companies consisting of friends, relatives and neighbors from the hometown, Slate points out.

Those factors contributed to acts of seemingly suicidal courage during notable battles such as Gettysburg. The Wall Street Journal‘s book review cites a desperate charge by the 1st Minnesota Volunteers on the second day of battle against a much-larger Confederate force. 215 out of 262 men fell dead or wounded.

Another regiment at Gettysburg, the 20th Maine, endured several hours of relentless Confederate attacks on the extreme left flank of the Union Army. Commanding officer Colonel Chamberlain ordered a similar bayonet charge after his soldiers ran out of ammunition, and the beleaguered regiment managed to break the Confederate assault.

The film [Gettysburg_ also shows the quieter moments where social connections asserted themselves among Civil War soldiers. One scene has Chamberlain discuss what to do with mutinous Maine soldiers from a different regiment. His brother, also a serving officer in the 20th Maine, cautions against shooting them. “You can never go back to Maine if you do that,” he warns.

And as the data shows, soldiers who suffered a similar shame through desertion were almost 50 percent more likely to move to a different state after the war. Sometimes it’s true that you can never go home again.

For more on how a lack of social connections and altruism hurts, see this socioeconomic experiment