Cheap, power-sipping sensors do everything from tracking global warming to keeping your house warm 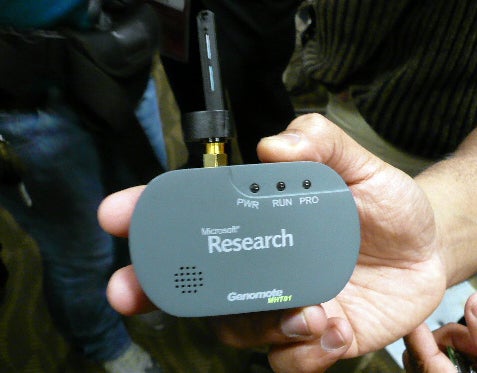 The ability to scatter lots of wireless sensors over a wide area has tremendous potential, whether it’s tracking the melting of a glacier, the stress on a bridge span or the temperature in your home. The trick? Making them cheap enough so you can use plenty, and having them last long enough so you don’t break the bank or your back changing batteries (those trips to the glacier add up). This week, Microsoft showed us a prototype version of a wireless sensor that tackles both challenges.

The sensors shown at Microsoft’s TechFest (the company’s annual science fair) run on a pair of AA batteries for up to four years. And while they didn’t have cost estimates for a final production model, the basic data processing/radio transmitter chips from TI sell for only about $3 each.

Microsoft doesn’t plan to sell sensors themselves — they were demonstrating a reference design they will provide to other manufacturers. The company’s interest is in selling the software used to track and monitor the data dished up from sensors by the dozens, or the hundreds.

Today the hardware and software is being tested in Microsoft’s own data centers. Large mainframe computers generate lots of heat. By scattering wireless temperature sensors through the area, software can locate hotspots and balance the computational loads on the computers to keep the temperatures in a safe range.

In the future, a home climate-control system set up in zones could make use of the same technology to read a separate wireless thermostat in each room and target heating and cooling efficiently.