Ebola Virus Cured in Monkeys a Full Day After Infection

The Ebola virus—one of the world’s deadliest diseases—has a kill rate of 90 percent. That’s largely because the best current... 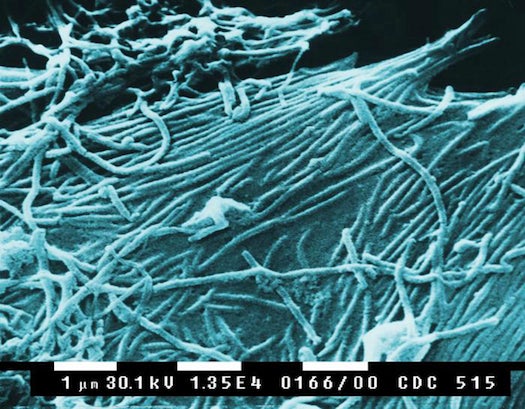 The Ebola virus—one of the world’s deadliest diseases—has a kill rate of 90 percent. That’s largely because the best current treatment must be applied within one hour of infection. Which is an almost impossibly brief window, considering symptoms may take anywhere from two to 21 days to appear in humans. But a new treatment has shown success in curing the disease when administered 24 hours or more after infection—at least when tested in monkeys.

Researchers at the National Microbiology Laboratory in Winnipeg, Canada gave a group of monkeys the deadliest strain of Ebola, the Zaire virus, and treated four of them with an antibody cocktail 24 hours later. All four survived. Out of another group of four monkeys treated 48 hours after infection, two did. A monkey infected with the virus but untreated lived for five days after being infected.

The cocktail improves on other treatments by using antibodies that target different parts of a protein on the virus; shutting down that protein makes it more difficult for Ebola to infect cells in the body. That sounds promising, even if it’s not a full-on miracle cure. If symptoms have already shown up, it might still be too late for treatment, but it could at least extend the window considerably. A phase I clinical trial is set to begin on humans in late 2014. Not that they’ll be infecting anyone; the treatment will be used on uninfected people to test the antibodies’ safety in the human body.