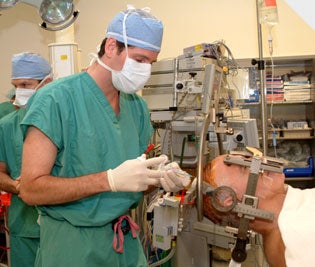 Dr. Michael Kaplitt injects millions of gene-carrying viruses into the brain of Nathan Klein, who suffers from Parkinson’s.

The gateway to the future of gene therapy is a hole 1 inch in diameter. Through the hole — drilled into the skull of Nathan Klein, a Parkinson’s disease patient with a shuffling gait and tremors that couldn’t be quieted through conventional treatment — Dr. Michael Kaplitt recently inserted 3.5 billion viral particles. The infusion, he believes, will deliver into brain cells
a gene that will correct the chemical imbalance that sparks Parkinson’s symptoms.

The immediate effect of the experiment, which Kaplitt, a professor at Weill Cornell Medical Center, conducted in collaboration with Matthew During of the University of Auckland in August, was to ignite a controversy. Colleagues working on similar projects called the experiment crazy: So far, gene therapy
in humans has racked up more failures than successes. The field is still reeling from
the “biotech death” of Jesse Gelsinger, a teenager who died from a gene therapy experiment in 1999. What evidence was there that gene therapy wouldn’t backfire again, causing irreversible side effects, a violent immunological response or even death? Why rush the experiment before other research on primates had been published? And why the unusual step of holding a press conference before the results were in?

Kaplitt says the protests miss the point. “The most important thing in this trial is to prove the safety,” he says. “Once you have patients who may be helped by this, it will demystify some of the perceptions out there.” But his assurances haven’t won many converts. “We’re toying with systems in a way God never intended, and no one knows what the consequences will be,” says Dr. William Langston, scientific director of the Parkinson’s Institute. One misstep, he cautions, could set the whole field back.

Gene therapy may be in its infancy, but great hopes for its potential to treat everything from cancer to Alzheimer’s to heart disease are forcing it to grow up fast. The National Institutes of Health have recorded more than 550 gene therapy protocols in the United States alone since 1990. And after two decades of lab research, gene treatments are increasingly making their way into human clinical trials.

The bulk of research so far has focused on getting a gene to its destination and coaxing it to turn on once inside a cell. On their own, genes can’t pass through cell membranes, and much effort has been spent to trick cells into accepting foreign genes. The most efficient couriers are so-called viral vectors: viruses whose genomes have been swapped out for therapeutic genes. Like Trojan horses, they slip genes into target cells undetected.

But as scientists are learning, there is no safe way to hijack a virus. The vectors sometimes trigger immune reactions. And once the genes are inside in a cell, there is no way to be sure they will function as intended. Case in point:
A Paris gene therapy trial to treat SCIDS, or the “bubble boy disease,” restored immune function in nine of 10 patients. But this year it was revealed that two of them have developed leukemia, possibly due to wayward genes that caused
T cells to proliferate. “We need to monitor (gene therapy) closely,” cautions Dr. Luc Jasmin, a neurosurgeon and gene therapy expert at the University of California at San Francisco.

Kaplitt is monitoring Klein, as he will the other 11 patients who are scheduled to receive similar gene therapy injections over the next year. Whatever the outcome, his experiment sets a new standard for boldness.