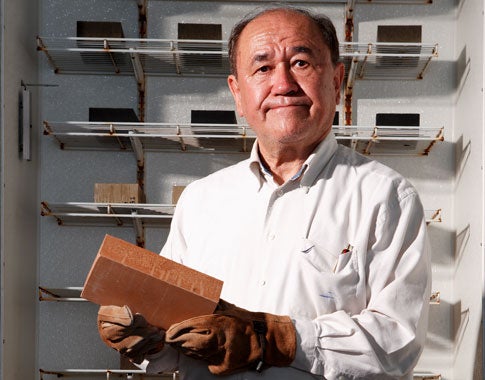 The U.S. churns out nine billion clay bricks a year—every one of them an expensive environmental nightmare. They require costly mining and bake in 2,000°F kilns that guzzle fuel and spit out pollutants. And making cement for concrete bricks spews thousands of pounds of poisonous mercury into the air annually.

So Henry Liu built a better brick, one that lasts just as long and puts to use a waste product of coal-power plants—fly ash—that would otherwise fester in a landfill. His bricks solidify under pressure, not extreme heat, so manufacturing them saves energy and costs at least 20 percent less. And because the bricks are molded, they’re smoother and more uniform, slashing bricklaying time and labor.
Liu, a 70-year-old retired civil engineer with a sober, matter-of-fact demeanor, spent most of his career using hydraulic presses to make industrial freight easier and cheaper to move by squashing it into compact blocks. In 1999 a power plant he was working with gave him some free fly ash, and Liu decided to run it through his hydraulic rig “just to see what would come out.”

Liu took the whitish powder, mixed it with water, and stamped it with 4,000 psi of pressure. Within two weeks (or, he later discovered, one day in a 150°F steam bath), the mixture set into blocks as strong as concrete. It’s no coincidence: Concrete sticks together because of cement, the calcium oxide of which binds with surrounding materials like crushed rock when it reacts with water. Liu’s bricks can be pure fly ash, which has calcium oxide levels of “between 20 and 30 percent,” says David Goss of the American Coal Ash Association. “It’s self-cementing in nature.”

Meeting federal safety standards, however, took Liu another eight years and $600,000 from the National Science Foundation. Bricks are required to survive 50 cycles of freezing and thawing. Liu’s cracked after just eight. He tried changing the shape, adding nylon fiber—nothing worked. Finally, he blended in a type of chemical known as an air-entrainment agent. Sometimes used to toughen concrete bricks, it produces millions of microscopic bubbles in the hardened block, giving water less room to sneak in and extending the lifetime of fly-ash bricks to more than 100 freeze-thaw cycles.

Liu aims to license the bricks to manufacturers next year. Will they form America’s new foundation? “The people who buy bricks will definitely be interested,” says Pat Schaefer, a sales manager for Jefferson City, Missouri, manufacturer Midwest Block & Brick. “But I don’t see the brick companies liking it at all.”