What the Cold Nose Knows

Man's best friend? Not if the man is on trial and the dog is an expert "nose witness" who may be more convincing than reliable.

Juries love dog testimony. As witnesses go, nothing beats a
canine for sincerity and trustworthiness, and nothing brings a little light into a dismal courtroom like the goofy grin and thumping tail of a hound.

“The jury eats it up,” says police K-9 handler Pat McAlhany, a veteran of the Miami-Dade County Sheriff’s Office. “From a prosecutor’s standpoint, there’s nothing better than my actually bringing my dog into the courtroom for a demonstration.”

Indeed, the practice of using dogs as “nose witnesses” to finger, as it were, the accused is rapidly growing. A rape case that passed through the Los Angeles court system last year illustrates the procedure. A young woman came into the police department and described a brutal attack. Two men had dragged her from a bus stop in an industrial part of the city into an alleyway, where they sexually assaulted her. Traumatized, she initially did not report the attack. But two days later she found a necklace she thought one of the rapists had ripped from her neck. It lay outside the school where she worked. Did one or both of the attackers live in her neighborhood and know her daily habits? She also spotted a man at a local market who reminded her of one of the attackers. Now terrified, she went to the police.

The delay meant a rape kit could not provide DNA evidence. Not a problem. Enter Reilly, a confident, experienced expert witness with boundless enthusiasm for his job. Under the leash of volunteer scent-evidence K-9 handler Joseph D’Allura, this chocolate Lab’s scent-detection skills had put killers behind bars. For the rape case, D’Allura created a “scent lineup,” using a scent transfer unit that worked like a Dustbuster, sucking the perpetrator’s odor off the snatched jewelry and onto a sterile gauze pad placed over the
vacuum’s air intake. He then vacuumed a piece of clothing taken from the neighborhood resident who had aroused the rape victim’s suspicions in the local market.

D’Allura prepared the scent lineup by placing the suspect’s pad alongside three decoys infused with scent from other individuals. Finally, he presented Reilly with the necklace scent pad and directed him to find its match. Passing over pad number one, the dog gave the second sample a wag and a bark–
an “alert” in dog-handling lingo. The police had a positive ID.

Or did they? Juries may love a dog show, but some experts remain skeptical. “In all honesty, we don’t know what a dog is picking up on when it alerts,” says Lawrence Myers, an Auburn University sensory and behavioral biologist called as an expert witness for the defense in the rape case. Over the past 21 years Myers has trained more than 50, and studied hundreds, of scent-detecting dogs under laboratory and field conditions, mostly for federal agencies wanting to perfect the use of dogs for finding explosives, drugs, trapped disaster victims and hidden graves.

Myers considers the canine nose the ultimate odor-detection system in use today. But in many ways, he says, “we’re still dealing with a black box.” Scientists have yet to fully understand the process of canine odor identification. Neither have they defined the limits of a dog’s sense of smell, nor isolated any universal “scent factor” that dogs use to distinguish one person from another.

The widely held view is that dogs pick up on variations in the chemical makeup of the skin flakes and perspiration residue we all continually shed. But no one knows which aspects of this microscopic brew grab a dog’s attention as it plays a forensic game of mix and match. Might racial or gender differences skew results? Or, for that matter, some yummy-smelling food the person ate the previous day?

When it comes to something as complex as human scent, Myers believes that different dogs likely tune in to different things. And no dog is perfectly consistent. Myers’s research has shown that something as mundane as dental tartar can have a ruinous effect on a dog’s powers of discrimination. “Clean the teeth and you get an almost immediate recovery of smell,” he says. Scent dogs also have off days, suffer allergies, get colds. “Trouble is,” he says, “you can’t cross-examine a dog and ask, ‘Are you sure?’ “

So Myers has deep misgivings about the growing number of calls he’s getting to testify in rape and murder cases that hinge largely on a doggie’s positive ID. “It’s like the floodgates have opened,” he says.

Dog scent lineups aren’t new, how-ever. Estimates suggest they’ve played a role in more than 1,000 criminal cases in the United States, going as far back as 1923. Today, most states and the District of Columbia admit dog scent evidence as valid identification of the accused, “provided a proper foundation is laid.”

Despite this long history, a scientific basis for that proper foundation has never been established. Many prosecutors try to skirt that fact by arguing that scent lineups are no more than a logical continuation of the practice of employing dogs to track fugitives or sniff out drugs–uses that have long passed legal muster. Some judges buy that argument, some don’t.

The courts rely on handlers to demonstrate a dog’s reliability by
submitting training records. But it’s widely known in handler circles that many are loathe to record a dog’s mistakes, lest the errors later be used to discredit the dog’s identifications.

Research reveals that even experienced and well-trained dogs sometimes misidentify individuals. In studies conducted in Europe (where scent lineups have become tightly regulated and standardized), dogs’ identification scores varied from a high of 58 percent to a low of 22 percent. Researchers have conducted such studies both on-lead (with a handler holding the dog’s leash) and off, in an effort to tease out or exclude a handler’s influence.

That some handlers inadvertently prompt their dogs is a major criticism of scent lineups. And the critics include some of the nation’s most experienced search-dog handlers. “We have a saying in dog training circles,” explains police K-9 instructor Roger Titus, vice president of the National Police Bloodhound Association. “Your body language goes down the leash.” A well-trained dog becomes hyperaware of its handler’s every move, Titus explains. “You lean forward, it moves. You slow down, it does too. You walk down a lineup of six baseball caps, and all you have to do is think you’re at the right one, and the dog picks up on it.” Some call it the Clever Hans effect, after the 19th-century equine genius whose mathematical prowess turned out to be nothing more than the horse responding to the unconscious nod of his trainer’s head.

Dog-evidence enthusiasts have reason to be cautious, Titus warns. Much of the precedent-setting case law, including murder convictions, behind the acceptance of scent lineups came from the now discredited work of a single handler, who was later shown on videotape to be cuing his dog.

The expanding use of scent lineups has become a hot-button issue in the police-dog handler community. The National Police Bloodhound Association and the Law Enforcement Bloodhound Association have both developed guidelines for proper lineup procedures, while their memberships remain deeply divided over the legitimacy of the practice.

“The fact that a dog might send somebody to the electric chair places a tremendous responsibility on the handler,” admits McAlhany. “That said, my confidence in my dog and myself is very high. I would feel comfortable going to court and testifying that, yes, she can use a scent article and make a positive ID.”

Confidence in dog and handler aside, the scent-collecting process itself is not above controversy. “Scent is a fragile creature to begin with,” argues Titus. “In my opinion, the use of scent machines takes the whole idea further down the line of pipe dreams.”

The scent transfer unit’s inventor, Bill Tolhurst of the Niagara County (New York) Sheriff’s Department, dismisses that argument. Tolhurst says he’s successfully run dog scent lineups using evidence pads stored for more than 11 years in frozen, heat-sealed plastic bags. Tolhurst, a three-time past president of the National Police Bloodhound Association, says he’s pulled human scent off shell casings from drive-by shootings. Among his proudest accomplishments, he says, is a conviction in a kidnapping and attempted murder case in which his bloodhound matched the defendant to scent vacuumed off the seat of a car last driven by the offender.

To date, Tolhurst has sold more than 80 of his scent-collecting machines to law enforcement agencies–including 35 to California police and sheriff’s departments and 7 to the FBI.

Lawyers will be arguing about the merits of dog-witness identifications and procedures for years. In the rape case described earlier, the judge
ruled Reilly’s scent identification inadmissible, citing, among other things, D’Allura’s lineup procedure. D’Allura stopped the lineup as soon as Reilly alerted on the second pad, rather than allowing him to proceed down the line. In addition, D’Allura couldn’t recall when or from whom he’d made the lineup’s three decoy pads. Were they from individuals of the same race as the suspect? D’Allura couldn’t say.

Of course, having evidence dismissed is part of the legal process; win some, lose some. D’Allura points to several cases in which Reilly’s testi-mony played a decisive role. In a major coup for scent lineup proponents, a California appeals court recently upheld Reilly’s identification of a teenager convicted of a double homicide, as well as the young man’s sentence of two consecutive life terms.

Does the cold nose know? Criminal juries may be happy to say yes. But the scientific jury remains out.

3. To wire the chip, solder the black battery lead to pin 3 and the red to pin 4. Solder pins 2, 7 and 6 together with a small bridge wire. (I removed pins 1, 5 and 8 to make it easier to solder the other pins.) Solder a wire from the bridge connecting the pins to the contact point that triggered the shutter. 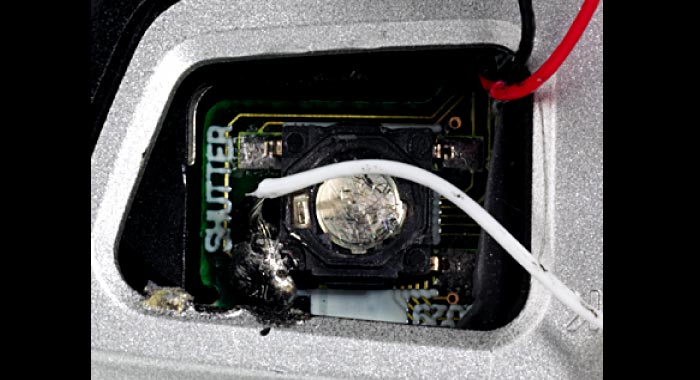 2. Pop off the shutter button, and you should see two or three solder points–touch each with the black battery lead you just soldered to figure out which one makes the shutter fire. 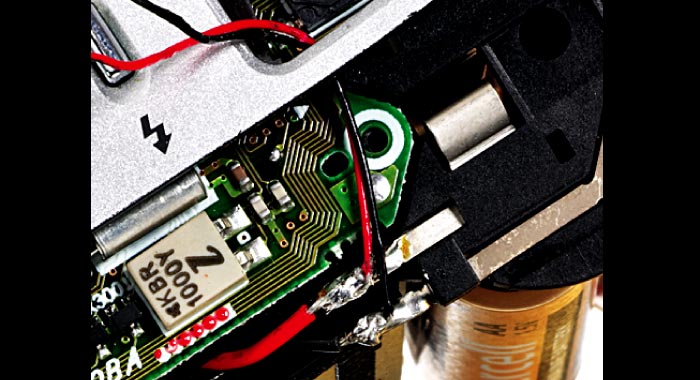 1. Take the back off the camera and find the red and black wires connected to the battery contact points. Solder same-color leads to these points. 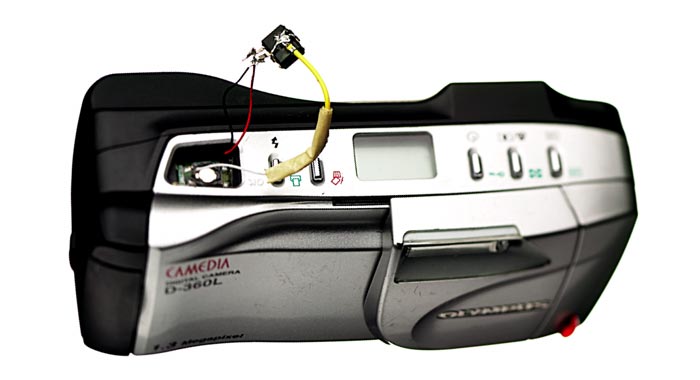 4. Reassemble the camera. It will start shooting as soon as you turn it on and will keep going until the memory card is full.
scent detection
Science