A microbial scale paves the way for better toxin detectors. 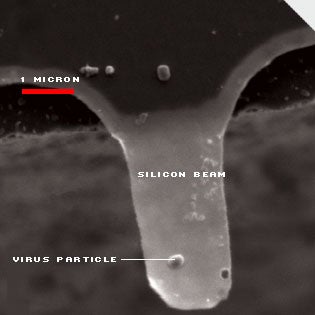 by Courtesy School of Electrical and Computer Engineering, Purdue University

This diving-board-like scale etched from silicon balances a single vaccinia virus particle. The scale is roughly 100 times smaller in width than a human hair.

Purdue University researchers have created a scale so sensitive it can detect the ethereal weight of a single virus particle. The vaccinia virus, used to make the smallpox vaccine, checks in at 9 femtograms, or roughly one-trillionth the weight of a grain of rice. Next up: a relative of the SARS virus.

Why weigh germs? Lead researcher Bashir Rashid and his team created the tiny scale as part of an ambitious NIH-funded project to develop handheld devices that detect airborne microbes in real time. The scale, built on a micro-machined
1-square-centimeter silicon
chip, features a cantilever-like beam that has a natural resonant frequency, or wobble, of 1.27MHz. Attach a vaccinia virus to the beam and the
wobble changes, resulting in
a new frequency of 1.21MHz. Measured by bouncing helium laser light off the scale, the frequency change is proportional to the particle’s mass, allowing scientists to easily discern even the trimmest of microbes by weight.