A rocket torpedo that swims in an air bubble 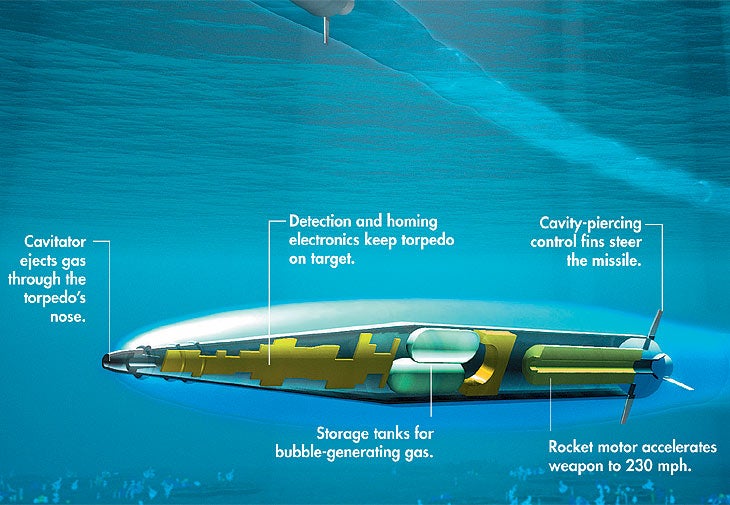 Several challenges remain for the supercavitating torpedo, including how it will be steered underwater. Water-tunnel tests have already proven that speed can be achieved: In 1997, the Navy tested a supercavitating projectile that reached 5,082 feet per second, becoming the first underwater projectile to exceed Mach 1.

Submarines peaked in power and relevance during the Cold War; there has since been a shift in focus to aircraft-based combat, and subs have become budget-cut victims. But subs are still prized for their ability to sneak about global waters undetected and to defend surface ships from attack. Many U.S. subs are being converted from missile launchers into delivery vehicles for special operations troops.

But the supercavitating torpedo–a rocket-propelled weapon that speeds through the water enveloped in a nearly frictionless air bubble–may render obsolete the old submarine strategy of sly maneuvering and silent running to evade the enemy. The superfast torpedo could be outfitted with conventional explosive warheads, nuclear tips or nothing at all–a 5,000-pound, 230-mph missile could do enough damage on its own. The Russians invented the concept during the Cold War, and their version of this underwater killer–dubbed the Shkval (“Squall”)–has recently been made available on the international weapons market; the United States, of course, wants a new, improved version of the original.

The hard part about building a rocket-propelled torpedo isn’t so much the propulsion as clearing a path through the ocean. Water creates speed-sapping drag; the best way to overcome that drag is to create a bubble that envelops the torpedo–a supercavity. A gas ejected uniformly and with enough force through a cavitator in the nose of the torpedo will provide such a bubble, permitting speeds of more than 200 mph and a range of up to 5 miles (traditional torpedoes have slightly longer ranges, but lumber at only 30 to 40 mph).
Though submerged, the torpedo remains essentially dry, with a frictionless surface. “That sounds easy, but doing it is extremely difficult, especially if you’re trying to steer,” says Kam Ng, program manager for the torpedo at the Office of Naval Research, which has been developing the weapon since 1997. “If your torpedo moves in a straight line, you just aim and shoot,” says Ng. “That capability already exists with
Shkval. But the U.S. vehicle will be more capable–it will turn, identify objects, and home in on the target.” (Improvements to the torpedo to make it steerable likely froze when the Soviet Union collapsed, says GlobalSecurity.org’s Pike.)

Among the greatest challenges for U.S. torpedo researchers is developing detection and homing technology that will enable the torpedo to distinguish an enemy sub from, say, a rock formation, says Ng. Also tricky is finding a way to control the gas bubble to permit those course changes. “When you turn, the bubble distorts because it is no longer symmetrical,” he says. “So you have to compensate for that by putting more bubble to one side.” This is done, Ng explains, by ejecting more gas toward the outside of the turn.

Naval officials say the high-speed torpedo will enable submarines to attack enemy subs and surface ships without giving them time to respond. The U.S. military has tested a prototype, but combat-ready versions are not expected for at least 15 years.