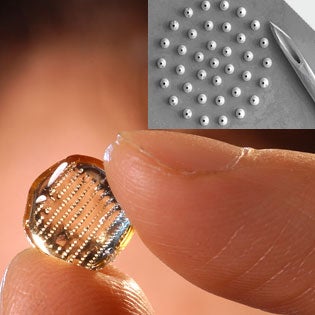 Georgia Tech researcher Mark Prausnitz holds an array of 400 microneedles designed to punch tiny holes in the outer layer of the skin. Inset: a ring of microneedles, each with a 75-micron-wide tip, next to a typical hypodermic, which is six times as wide.

The next time you roll up your sleeve for a painful hypodermic jab, take heart: Researchers at the Georgia Institute of Technology may soon deliver an ouchless alternative, called microneedles. These near-invisible pokers, made from silicon, metal, glass or biodegradable polymers, are as much as 500 times smaller than an ordinary hypodermic — too minute to irritate nerve endings, says Mark Prausnitz, lead investigator for Georgia Tech’s microneedle research program.

An array of 400 embedded in an adhesive patch could gently puncture the skin, making it permeable to extended-release medication such as insulin, which contains protein molecules too large to slip by skin cells unassisted. Or, attached to a syringe, a single microneedle could deliver drugs directly to cancer cells. Though licensing deals are already in the works, the technology must still be cleared by the FDA. Expect your painless shot within the next five years.