Snapshot of a Bureaucracy 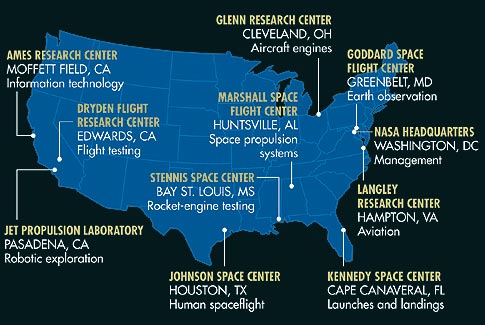 “To understand and protect our home planet. To explore the universe and search for life. To inspire the next generation of explorers…as only NASA can.” That’s the avowed mission of the U.S. space agency. But to understand what NASA actually does on a day-to-day basis, you need to look at the agency’s organization and budget.

Established in 1958, the National Aeronautics and Space Administration has grown into a sprawling enterprise with research centers and flight facilities across the country. NASA employs more than 18,000 civil servants, and that’s not counting people on the payroll of aerospace contractors hired by the agency.

Most of the work is done at 11 centers, each of which has a particular focus and expertise (see map above). NASA also has field-testing facilities at Wallops Island, Virginia, and at Las Cruces, New Mexico.

President Bush’s budget for fiscal year 2004, which began on October 1, 2003, earmarks $15.5 billion for NASA, about 3 percent more than in 2003. If that sounds like a lot of money, consider this: It’s less than 1 percent of the total federal budget, and less than the Department of Defense will spend on space this year.

The agency’s budget seems even more modest once you realize that the lion’s share goes to the International Space Station and the space shuttle (see statistics below). Together, they consume more than NASA’s entire budget for exploring Mars and our solar system, for searching for extraterrestrial life, for studying the structure and evolution of the universe, and for observing Earth with remote-sensing and weather satellites.–dawn stover

Space science (including solar system exploration, the search for life, and space-based telescopes): $4,007

Crosscutting technologies (including the development of new launch
vehicles): $1,673