Your Phone Knows Where You Are

With E911, your cellphone's location can be tracked within seconds. Sounds great for emergencies, but is there a dark side? 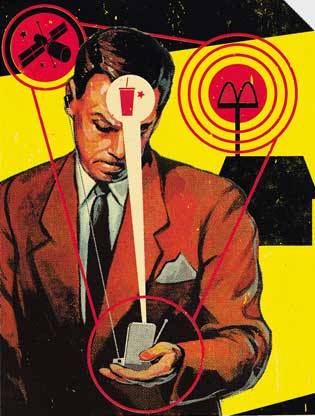 In February 2001, while driving on the state turnpike to her home in Miramar, Florida, 32-year-old Karla Gutierrez lost control of her BMW 328i and skidded into a canal. She dialed 911 on a cellphone and explained her predicament as the vehicle slowly sank. But since Gutierrez couldn’t describe her precise location-“I’m not sure where I am,” she told the operator-Miami-Dade County rescue units didn’t know where to go to save her. By the time a passing patrolman noticed a busted fence by the accident site and found Gutierrez, she was dead.

Cases like this give emergency workers the shivers. If Gutierrez had called 911 from her home, the dispatcher would have instantly seen her exact location on a computer terminal, because landlines are matched to household addresses in emergency-services databases. But mobile phones are untethered to any network and provide no clue about where an SOS is coming from.

With more than 200,000 emergency calls coming from cellphones daily, the Federal Communications Commission is eager to remedy this defect. In 1997, the agency ordered wireless carriers to equip their systems with Enhanced 911 (E911) technologies, which would enable rescuers to pinpoint a caller’s location to within a few dozen meters. But privacy advocates aren’t convinced that the upgrade, due to be completed by 2006, is good news. They fear E911 could make it impossible for people to do anything without someone-employers and the police, for starters-being able to discover where they are.

There are two competing E911 systems. Most big carriers, like Nextel and SprintPCS, are piggybacking on the Global Positioning System (GPS), a series of 24 satellites originally launched by the Pentagon to aid military operations. GPS chips embedded in new phones factor the arrival time of several satellite signals to compute the caller’s longitude and latitude. The downside of the GPS-based approach, however, is that it requires people to buy new phones. Thus carriers such as Verizon Wireless are deploying a different E911 system that works with virtually any existing handset. These carriers are placing sensors inside the towers where mobile signals are routed. When a call for help is sounded, the three or four closest phone towers measure how long it takes for the signal to arrive, then triangulate the victim’s coordinates. These systems are being installed in places with relatively low population density, such as Gary, Indiana, and St. Clair County, Illinois. The approach is not as accurate as GPS-based E911, but because distressed callers are usually more visible in a rural landscape, precision is less vital.

Each carrier is ponying up about $1 billion to install E911, an expense that will be partially covered in some states by 50-cent-per-customer monthly surcharges. The companies hope to recoup the rest of their investment by using the emergency networks to offer profit-generating, so-called location-based services. A cellphone equipped for E911 could, for instance, direct drivers to the nearest gas station, or gourmands to the closest trattoria. A Japanese carrier already offers a service in which a cartoon character programmed into the phone makes goofy comments based on the user’s location-like remarking “Get a life!” when the phone’s owner stays late at work.

It’s these kinds of E911 applications that alarm privacy advocates, who fear marketers will unleash a torrent of targeted spam. A person strolling by a McDonald’s, for example, might be zapped an electronic coupon for a Big Mac. Even worse is the potential for covert surveillance. At least one trucking company is already using location-based service networks to monitor employees-to know, for instance, when drivers are taking breaks in strip malls that have topless bars. Privacy watchdogs worry that when E911 turns all cellphones into location-based service systems, people won’t be able to escape being tracked by employers, the government-even jealous spouses.

Mindful of these qualms, the FCC is considering instituting privacy rules for E911. But telecommunications companies insist that’s unnecessary because they’ll voluntarily add privacy safeguards. Some GPS phones, for example, will send location data only when a caller dials 911; in all other calls, that information will be withheld unless an “I am here” button is pressed.

That might be a happy medium that consumers can live with. According to a Cahners In-Stat survey conducted last fall, 81 percent of cellphone users said it was “extremely important” to be able to turn location tracking off. In other words, people want increased safety, but not if it means they will be bombarded with burger coupons.