Workaholics, shopaholics, compulsive exercisers: Where do we draw the line on addiction? 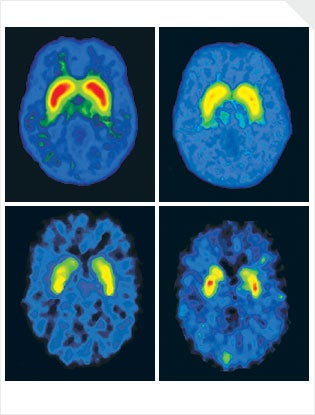 WHAT BRAIN SCANS REVEAL Clockwise, from top left: Normal brain, brain of an obese person, brain of an alcoholic, brain of a cocaine user. The brightly colored areas in these images mark the nucleus accumbens, the brain’s reward center. Red indicates a high number of receptors for dopamine, a brain chemical that transmits sensations of pleasure; yellow and green indicate fewer receptors. People short on dopamine receptors have difficulty feeling joy. Many scientists have been surprised by recent studies revealing that the biochemistry of classic addictions, such as alcoholism and drug abuse, is strikingly similar to that of compulsive activities, including gambling and overeating.

It’s Martin Luther King Jr.’s birthday, and Hans Breiter, director of the Motivation and Emotion Neuroscience Center at Massachusetts General Hospital, has the day off. Sort of. He’s sitting in his home art studio, gluing together a statue that broke soon after his 9-year-old son made it. Meanwhile, with his cellphone kinked against his neck, Breiter is fielding call after call, discussing the intricacies of neuroscience with people he couldn’t squeeze into his hectic weekday schedule.

Breiter’s life is a blur of family and research; he jokes that skimping on sleep is the only way he fits it all in. But ask him if he’s a work addict and he becomes stone serious. “That stuff’s controversial,” he says, “very controversial.”

The question of whether a behavior-like work, sex, exercise, or gambling-can be characterized as addictive in the same way drugs are is at the heart of an intense debate among neuroscientists and psychiatrists.

On one side are researchers like Breiter, who has recently published some of the most tangible evidence
yet that certain pathological human behaviors travel the same biological pathways as addictive drugs. Using brain-imaging technology, Breiter demonstrated that gamblers at slot machines show increased blood flow
in the same brain areas where cocaine produces a surge in dopamine-the transmitter that carries neural messages relating to pleasure and pain.

Eric Nestler, professor of psychiatry at the University of Texas Southwestern Medical Center, obtained results that point to another pathway shared by addictive drugs and some pathological behaviors. In a series of experiments on rodents, Nestler showed that the same proteins that regulate genes involved with drug addiction seemed to escalate tendencies toward pathological exercise. “These animals sometimes run 20 miles a day in a little wheel, and show the same changes in brain reward pathways that we’ve seen in drug addicts,” he says. In fact, by manipulating these proteins, Nestler was able to stop the animals’ apparent exercise compulsion.

Other investigators have used both animal and human studies to show that cocaine addicts and overeaters experience similar dopamine responses. And there is also evidence that medications for treating drug addictions, such as naltrexone for narcotics, can diminish the urge for gambling and shoplifting.

In fact, according to the Diagnostic and Statistical Manual of Mental Disorders, the American Psychiatric Association’s bible of mental health, no one is actually “addicted” to anything. People who overuse drugs and alcohol have “substance-related disorders,” and the only so-called behavioral addiction in the book is “pathological gambling.” The word “addiction” never appears.

That’s an embarrassing oversight, says Norman Rosenthal, a professor of psychiatry at Georgetown University who has extensive experience with so-called behavioral addictions. “This isn’t just an academic matter of classification, it’s a matter of allowing patients
to have the full benefits of everything we’ve learned over the past 80 years about alcoholism and drug addiction. If we aren’t willing to entertain the possibility that we’re dealing here with addiction, we’re depriving people who are in desperate need.”

Whether they use the word “addiction” or not, there is one point scientists seem to agree on: It would be extremely valuable to identify the biological cues that indicate when a behavior becomes pathological, so that it can be treated with psychological or pharmacological approaches. Researchers often refer to this as the hunt for “the switch,” the sign that something has gone from healthy or recreational to obsessive. Finding it, however, will take some time, because animal tests can’t be used to monitor human behavior like habitual shopping or an addiction to cybersex. And human brain imaging studies tend to be lengthy and are only now beginning to uncover the scantiest evidence for how obsessive and compulsive behaviors as well as addictions work.

“We don’t know what that switch is,” says Breiter, still working on his son’s statue. “We’re starting to localize which brain regions mediate different aspects of addiction, but we have quite a way to go. But I think in the next six to 10 years, we will have very strong, compelling data as to what’s going on.” Especially if scientists like Breiter keep working nights and holidays.