Can We Cure Everything?

Scientists are making headway on our most vexing health issues 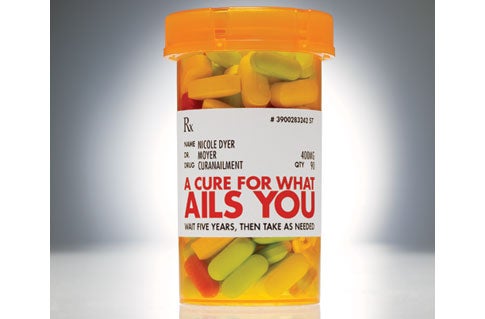 While some scientists are looking to the future, trying to push the human body beyond its natural limits, others are fighting the same old scourges we’ve always faced. Here, an update on five particularly stubborn ailments and promising research avenues that might finally lead to cures.

CANCER
What goes wrong When DNA is dam-
aged beyond repair–by viruses or exposure to chemicals or radiation–cells can grow out of control and form tumors.

Why it’s so tricky In a word, metastasis: Tumor cells spread to other parts of the body through the bloodstream or lymphatic system, creating a runaway disease.

Tomorrow’s Rx
** ” Detecting tumors earlier than ever** Proteins on the surface of cancer cells may serve as “biomarkers”–telltale signs of the disease’s presence in the body. Researchers at the Fred Hutchinson Cancer Research Center in Seattle and elsewhere are studying the hundreds of thousands of proteins in blood to learn which ones are associated with specific cancers. Once a biomarker is identified, the next step is to make a traceable protein that binds to it. Doctors would then be able to identify nascent tumors through routine PET or CT scans. Toxic agents could also be attached to the binding proteins so that they would not only find but destroy budding tumors.

Why it’s so tricky Blood-sugar levels fluctuate significantly during the day, and it’s difficult to replicate the body’s fine-tuned self-regulating system.

Tomorrow’s Rx
** ” Making personalized cells that produce insulin** Embryologist Miodrag Stojkovic of the University of Newcastle in England is experimenting with stem cells made from patients’ own bodies. His plan: Take a skin cell from a diabetic patient and swap its genes into a human egg left over from infertility treatments. When this hybrid cell starts dividing, extract stem cells–“starter” cells that can become any type of tissue. Stojkovic hopes to turn these into pancreas cells, which naturally produce insulin; he’ll then inject them into the patient, for whom they will be a perfect genetic match.

ALLERGIES
What goes wrong An allergic reaction is an immune response that goes overboard. Symptoms ranging from itchy eyes to anaphylactic shock can result.

Why it’s so tricky Allergy attacks are caused by our own bodies’ immune systems, so fighting back recklessly could knock out our natural defenses.

Tomorrow’s Rx
** ” Turning off the allergic response at its source** Researchers at UCLA and Virginia Commonwealth University have developed an experimental treatment for cat allergies: a molecule that is half cat, half human. On one end is a protein found in cat dander that triggers an allergic reaction when it binds to the surface of cells in the human immune system. On the other end is a human protein that turns off the allergic response when it binds with another protein on the surface of the same cells. The combo jams the troublesome part of the immune machinery.

CHRONIC PAIN
What goes wrong Acute pain is a healthy response to injury; chronic pain is a broken record. It may be caused by poor communication between nerve cells.

Why it’s so tricky Scientists don’t fully understand the pathways that transmit pain signals to the brain, so they’re unsure how best to block errant signals.

Tomorrow’s Rx
** ” Hijacking a virus to deliver a pain-killing gene** Researchers at the University of Michigan have reduced some types of pain in rats by introducing into their bodies a human gene that produces a natural painkiller called enkephalin. The scientists spliced the human gene into a carrier–an inactivated herpes virus–and injected it under the animals’ skin. The virus traveled through the nerves to the spinal cord, where it inserted the new gene into the rat’s own genetic material. The new gene started producing the painkiller. The researchers hope to begin human trials within 18 months.

Why it’s so tricky More than 200 viruses cause colds, and their protein shells keep changing shape to create new disguises.

Tomorrow’s Rx
** ” Throwing a molecular monkey wrench into the works** When a virus enters a human cell, its outer shell opens, like the trapdoor in a Trojan horse. Inside are genes that turn the human cell into a virus-making machine. Scientists hope to block the trapdoor of a major cold-causing virus by filling a tiny cavity in its shell. A team led by Carol Post, a computational biologist at Purdue University, has shown that antiviral drugs called WIN compounds can wriggle into a virus’s protein shell and gum up the works. In human tests, one such compound, Pleconaril, speeded patients’ recovery–but only by a day. Drugmaker Schering-Plough is making a nasal-spray version that could be on shelves by next year.