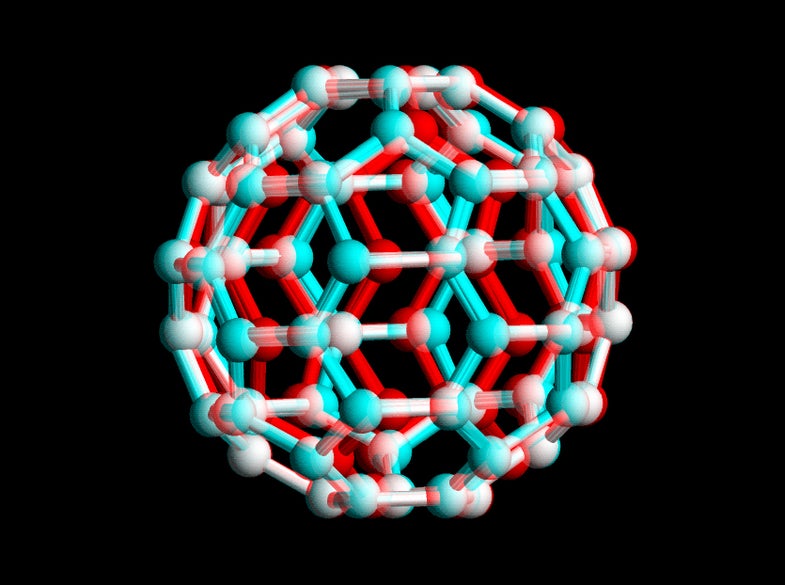 What the world needs most are more things that explode in more ways. A team of researchers from the University of Southern California in Los Angeles, as well as one with Brazil’s Federal University of São Paulo, sought the answer to a simple question: If they attached a compound known for its use in combustion to a dense carbon molecule, would the whole thing explode? Yes, it turns out. Why do this? Because they can, and because the field of nano-explosives is new, and it needs working tiny bombs before people can even start to figure out how to use them.

Starting from Buckminsterfullerene, a carbon molecule with a structure that resembles a geodesic sphere, their simulation attached a nitrous oxide molecule to the carbon base, and then let ‘er rip, heating it virtually to 1,300 degrees Fahrenheit. They dubbed their result a ‘buckybomb.’

In picoseconds, the molecule disintegrates into carbon parts and released gases, including more nitrous oxide to further fuel the explosion. Within 50 trillionths of a second the temperature goes from 1,300 degrees to 6,700 degrees Fahrenheit. That’s hot enough to melt most metals.

If it were real, this explosion would be super small, but that doesn’t stop it from being a tremendous bomb on an atomic scale. Why make such a tiny explosive? For now, it was mostly a demonstration in seeing what could be done. The researchers acknowledge that the nano-explosives field is new, waiting for breakthroughs, and it needs working tiny bombs before people can even start to figure out how to use them. A possible use could be, of course, destroying very small things. One idea calls for carbon nanotubes filled with water to be inserted into cancer cells and then heated up with lasers until they explode, functioning as a nanobomb that damages only the harmful tissue. Buckybombs, with their great explosive potential, could be an even deadlier weapon in a war against cancer, viruses, or bacteria, where their tremendous force and small size destroy small targets and leave the rest of the human intact.