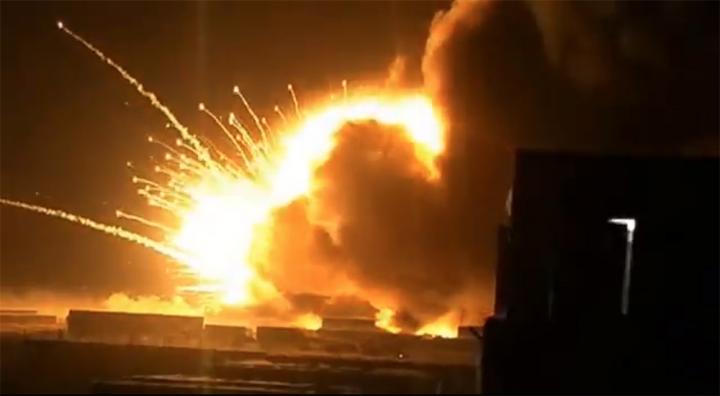 The 'cook-off' of an ammunition dump in Baghdad in 2006. Taylor Creasman/YouTube
SHARE

Seismometers are used to measure shaking that occurs during earthquakes, but they can also measure other kinds of shaking, like the roar of fans after a touchdown and even bear attacks. Now, researchers are paying even more attention to seismometer records, as they can also be used to pinpoint different kinds of weapons, in an expanding field known as forensic seismology.

In a paper published today in the Bulletin of the Seismological Society of America, researchers showed that they could decode different kinds of munitions exploding at an ammunition dump in Baghdad using seismometer readings. The seismometer had been placed in Iraq years before, ready to measure large ground-shaking events like earthquakes, or nuclear explosions. But instead, in 2006, it noticed a different kind of shaking, as mortar fire ignited the ammunition dump, instigating one of the most horrifying (and awesome) fireworks shows of all time.

“It was an accident that we got such a rich recording,” Michael Wysession, one of the co-authors of the paper said in a statement. “But sometimes science works that way; you get lucky.”

Eventually Wysession and his colleague, Ghassan I. Aleqabi, who had set up the seismic network, were able to go back and collect hard drives with data from the seismometer. By correlating the signals they found with records and eyewitness accounts, they could piece together a whole story leading up to when a mortar attack touched off the ammunition ‘cook-off’. In looking at the results right before the main explosion, they were able to detect two car bombs, mortars firing, and even a passing helicopter. They were also able to detect how fast it was going, and in what direction based on the shaking.

Aleqabi and Wysession believe that their analysis could help authorities pinpoint the location and cause of large explosions quickly, potentially halting a terror attack in its tracks.

“A network of seismometers in an urban area could tell you a lot about a terror attack.” Wysession said in a statement. “I think we’ll hear more about forensic seismology as time goes on.”