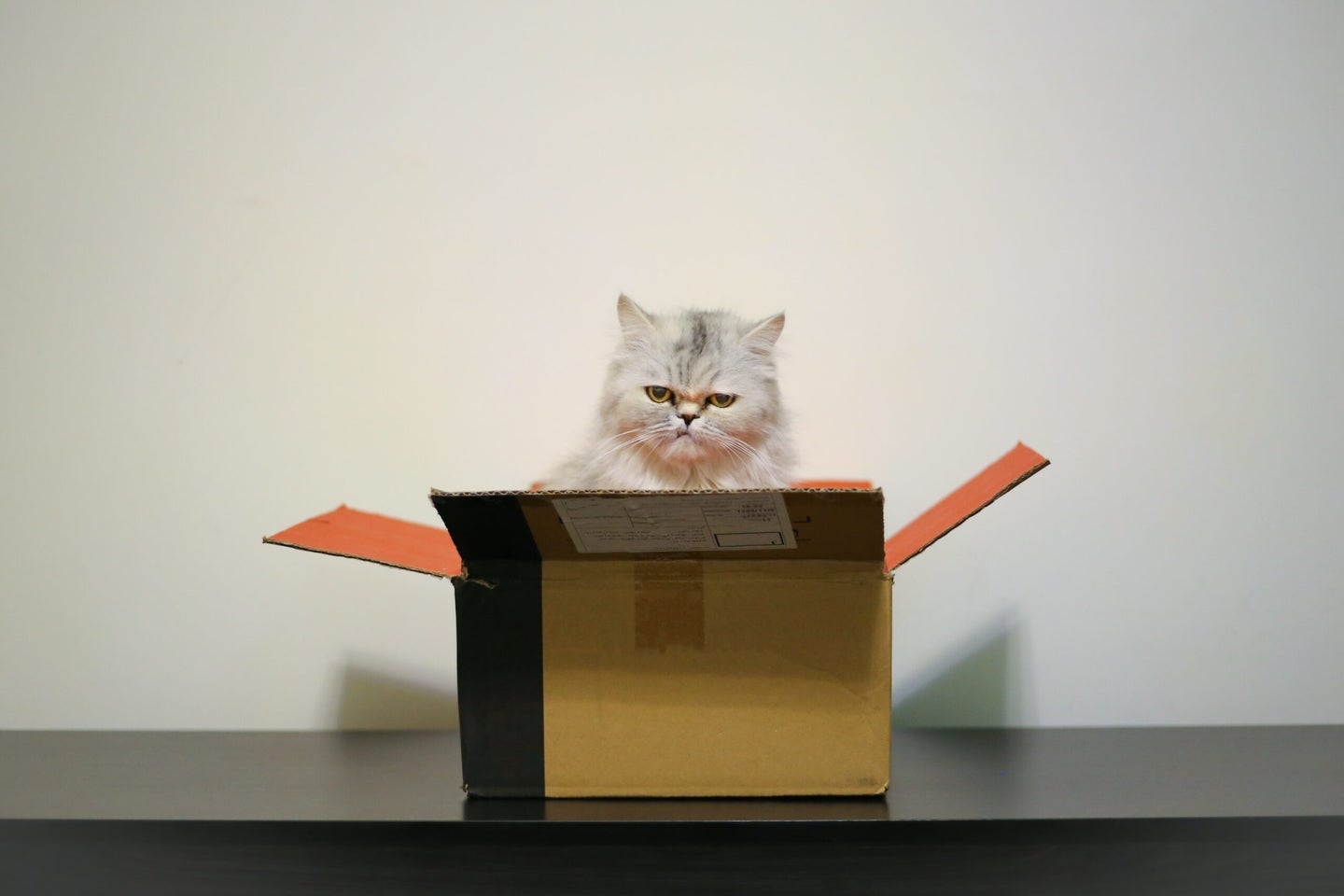 If it fits, well, you know. Sahand Babli/Unsplash
SHARE

Not all scientific research can be serious, impactful work. Some of it is just for the sake of knowledge. And it was in the pursuit of knowledge that a cat named Stinky Valium was presented with three potential spots to sit.

His options: a square outline, an illusory “square” made of four Pac-Man-like shapes, and the same Pac-Man shapes that didn’t form a square illusion. The test: Would Stinky Valium prefer to sit inside one of the squares?

He and eight other cats with less interesting names were part of a citizen science study designed to test to what degree cats prefer to sit inside boxes, no matter how illusory. The inspiration for the study came from an online phenomenon: people putting tape down on their floor in the shape of a square and recording their cats sitting inside the squares. See, if the internet knows one thing about cats, it’s that if they fits, they sits. That is to say, cats love to squeeze into boxes—generally speaking, the smaller, the better. The behavioral pattern is borne out of an instinct for tight, enclosed spaces, which are often safe spots for a small feline. A hidey hole is their preference, but a cardboard box will suffice, even if the sides are low, and in lieu of a box they’ll accept a version made of tape or paper.

This new research, published in Applied Animal Behaviour Science, shows that they’ll even go for a square that’s not really there: a Kanizsa square illusion. Humans and some other animals, including cats, will impose an imaginary square that exists inside the four Pac-Man-like shapes that form the “corners” of the “square.” This ability isn’t universal—it required a study to prove that cats could see the illusion in the first place, and babies younger than about four months don’t seem to see it.

The cats went for the Kanizsa square just as often as the full square outline, and more than the control (the Pac-Man shapes reversed).

[Related: Despite appearances, your cat does love you]

Normally, this kind of experiment would be conducted in a laboratory setting. But the pandemic offered a unique opportunity to have volunteers do the activity in their own homes. Though that makes for a less controlled experiment (which the researchers note will need to be done at some point), this citizen science approach did allow for the cats to behave as normally as possible. Cats, much more so than dogs, dislike unfamiliar settings and tend to behave differently in the lab than they do on their home turf.

But there was one major challenge to going the citizen science route: More than 500 people volunteered for the study, but only 30 completed all of the trials required. And of those, only nine cats actually selected any of the stimuli, whether because there was something more interesting going on or because the squares just weren’t intriguing enough. A lab setting might have mitigated some of those issues.

Research like this might seem silly—and to some degree it is—but it’s also an important part of studying cat cognition. On its own, this study might not contribute a huge amount to our understanding. Over time, though, it will become part of the body of knowledge on cat behavior.