Good news for lychee lovers: There may be a way to grow the fruits year-round

Lychee has a short peak season in the summer. But a missing chunk of DNA could help shift growing periods to different times of the year. 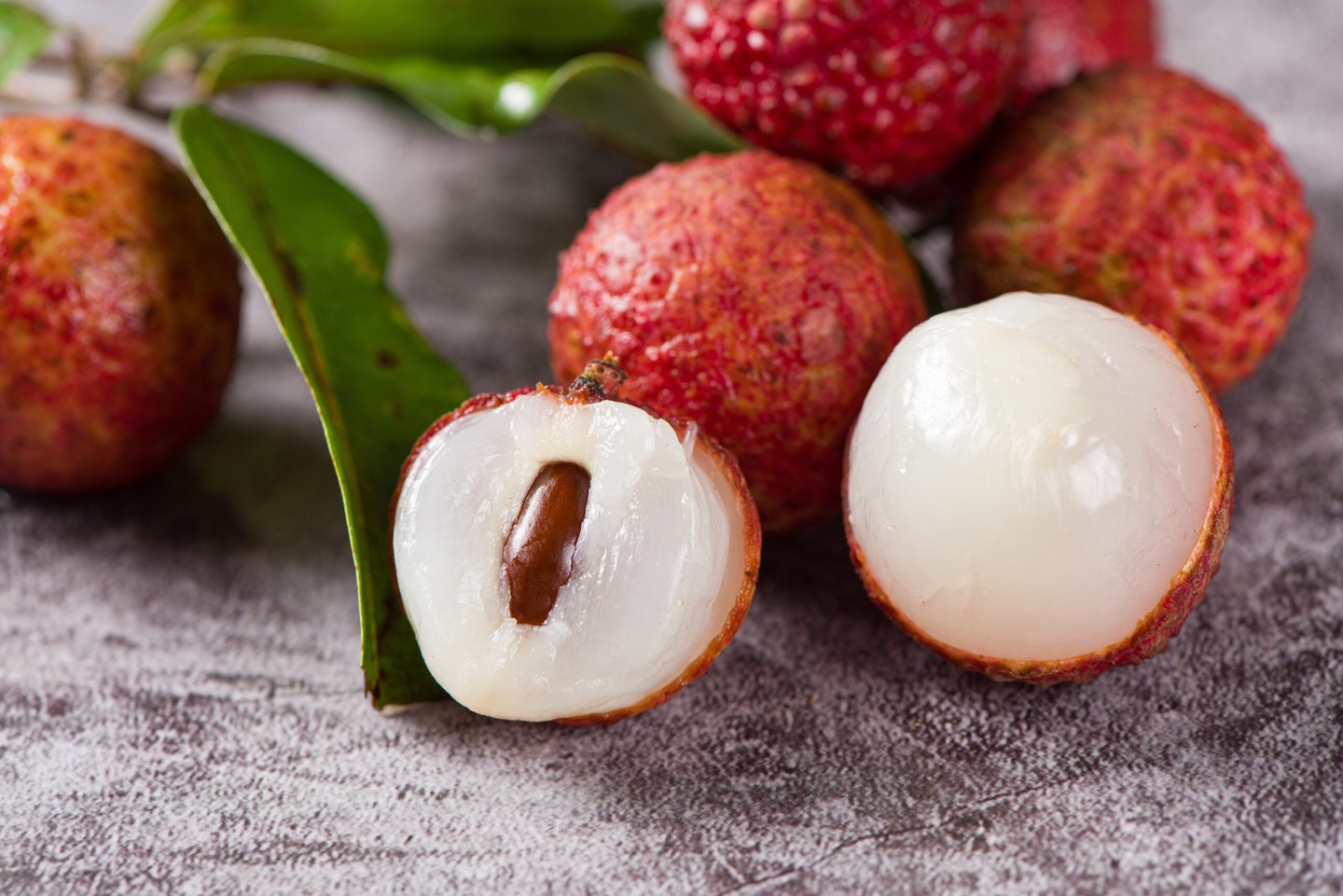 The white, translucent fruit of lychee is a staple in many Asian cultures. New genetic research on its domestication is helping scientists understand how the fruit grows. Deposit Photos
SHARE

Lychee is an iconic fruit: Today, the translucent sweet flesh under the red prickly skin is a refreshing and delectable treat in the summer, particularly in Southeast Asia. But for more than a millennia, people have grown and cultivated the tropical fruit in the southern regions of China. The juicy prized fruit even won over the palate of Emperor Xuanzong of the Tang Dynasty, who set up a horse relay system to quickly transport lychee from farms to the imperial courts.

Now scientists have identified a new mutation in the fruit’s genes that may help make lychee a snack beyond those hot months. A study released this week in Nature Genetics has revealed that lychee might have been domesticated by humans from wild populations twice in separate regions of China, each with different flowering times. By genetically selecting varieties with different flowering times, the new research could help steer lychee breeders in cultivating crops that yield fruit at different times of the year.

The study was led by a team of researchers at the Southern China Agricultural University in Guangdong, the largest lychee-producing province in China. They estimated that the fruits grown today shared a common ancestor around 18,000 years ago before they were domesticated by humans. After comparing the genetic material of 72 different genetic selections of lychees, the study found that the ones that flower early in the season in Yunnan in southwestern China share a common ancestor with those that flower later in the year in the island province of Hainan just south of mainland China.

[Related: We finally know how durian got so stinky]

To genetically trace back the fruit’s history, the researchers focused on the popular Chinese lychee variety Fei Zi Xiao, which is specifically farmed for its desirable flavor and larger size. Named after Emperor Xuanzong’s mistress Yang Guifei, who was known to love lychees, Fei Zi Xiao’s immense popularity and widespread availability has allowed it to endure over the years. This has made the variety a high-quality reference genome for research, says Victor Albert, a professor of biological sciences at the University at Buffalo and a corresponding author of the study.

Fei Zi Xiao fruits in early June, somewhere in between the early and late cultivated varieties, which hints to researchers that the variety is heterozygous, or a hybrid of the two original lines.

By comparing the genetic sequencing of wild and cultivated lychees, Albert and the team found a key gene that is responsible for this difference in flowering times, which then affects when the tree will bear fruit.

In one of the lines, DNA was missing from the gene that controls the flowering time of the tree and fruiting time of the lychee. This deletion, or mutation, in the gene causes the lychees to flower and fruit at different times, Albert explains. If the deletion is found in the genome, the lychees bloom early in the season. By conducting a genetic test on the plant seedlings, the researchers confirmed either the presence or absence of this important gene.

Peak lychee season is just a short window in the summer with most of the fruit ripening from early June to mid-July. Once picked, the fruit is highly perishable; it only lasts around 2 to 3 days at room temperature. “One of the big goals is to try to breed lychees so that they’re available throughout the season, and not just at one particular time,” says Albert.

The random mutation that controls flowering time is a natural occurrence, Albert goes on to explain. Understanding these mutations and how the lychee genome works can lead to improvements in the quality of the fruit—and potentially allow us to enjoy fresh lychees all year round.