Want MLB Players To Suck Less And Stay In The League Longer? Give Them Naps

Or some kind of downtime, at least. Two studies find negative effects for MLB players when they get worn out. 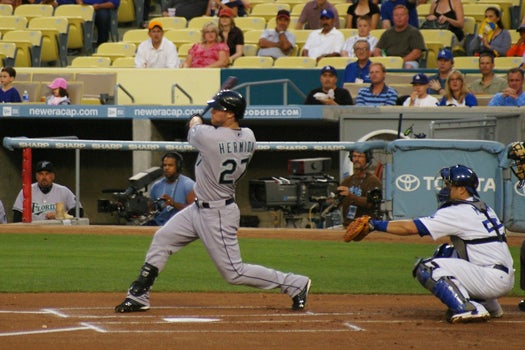 The slog of the baseball season isn’t easy on a player, unless he’s some kind of robot. Turns out the longer teams play through the MLB’s 162 games, the worse they do.

A new study tracked strike-zone judgement from September through April of last year’s season, seeing how often players were willing to swing at pitches they should’ve let go. Out of 30 teams, 24 were worse by April, and averaged for all teams, performance was considerably worse overall. Data from the prior six seasons showed a similar downward trend, suggesting that the 2012 data wasn’t a fluke.

So what was it? Fatigue, the researchers theorize: fewer days off over the course of a season along with the strain of travel. Practice throughout the season might’ve helped players improve, but it was outweighed by the stress of playing so many games, the researchers say.

Another recent study charted not just one season but entire careers against sleepiness. Lo and behold, tiredness correlated with a shorter career in the big leagues.

Researchers had major leaguers self-report based on the Epworth Sleepiness Scale, a (very short) survey designed to test sleepiness during the day. (What are your chances of dozing when “sitting quietly after a lunch without alcohol”?) The survey was taken with a random sample of 80 MLB players before the 2010 season started. The players with the highest scores were the least likely to be in the league three seasons later–they were either demoted to a lower league, not signed again, or for some other reason weren’t playing. A relatively small score of a 5 on the scale meant the players had a 72 percent chance of still being around when researchers checked back after three seasons. But the players who scored 15? Their odds of making it fell to 14 percent.

That’s quite a trend, even if it’s always good to have some skepticism toward studies based on self-reported surveys. (Are those players definitely sleepier than others? Or are they just more likely to say they are?) Also worth mentioning the old correlation versus causation rule: were the sleepier players kicked out because they were sleepy, or was there some kind of related problem happening?

Both teams of researchers suggest downtime or sleepiness screening could help offset the problems. Good for owners, and definitely good for players. Now let’s extend naps into all careers.