NASA Will Launch A 13,000-Square-Foot Solar Sail Next Year

The largest solar sail the solar system has ever seen weighs only 70 pounds. 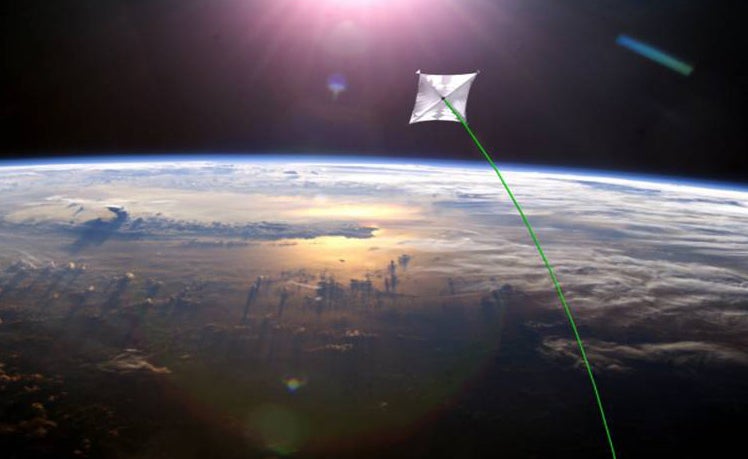 NASA’s new heavy lift rocket isn’t the only massive space propulsion system the agency has in the works. The largest solar sail the solar system has ever known is headed to the launchpad in 2014 on a mission that will eventually take it nearly 2 million miles from Earth. The demonstrator mission aims to show that the technology lessons learned from NASA’s smaller NanoSail-D mission and JAXA’s IKAROS solar sailing space vehicle can be leveraged into a large-scale space-traversing propellantless propulsion system.

The Sunjammer mission–the name is borrowed from an Arthur C. Clarke short story about an interplanetary yacht race–will unfurl a solar sail that dwarfs those that have thus far been tested in space. Where NanoSail-D’s diminutive sail measured just 100 square feet and Japan’s IKAROS measures something like 2,000 square feet, Sunjammer’s sail possesses a total surface area of nearly 13,000 square feet. Yet collapsed it weighs just 70 pounds and takes up about as much space as a dishwasher, making it easy to stow in the secondary payload bay of a rocket headed to low Earth orbit.

The sail will be made of Kapton, a super-thin film developed by DuPont that is used in all kinds of things, from space suits to flexible circuitry. The special layer of Kapton film developed by DuPont along with NASA is just 5 microns thick. Once unfurled, it is light enough that its own weight isn’t a hindrance yet strong enough that it can tow a support module across space using pressure provided by the sun in the form of photons as propellant, much as a maritime sail uses the wind to pull a sailboat across a body of water.

The destination for Sunjammer is the Earth-Sun Lagrange Point 1, a gravitationally stable spot way out there between us and our nearest star. And while Sunjammer is a demonstration mission and won’t be pulling an independent scientific mission along with it, the technology it is expected to enable could allow for a range of missions that are currently not possible with conventional chemical propellant systems. Particularly applicable would be missions to build a sun-monitoring space weather warning system, which could help protect infrastructure here on Earth from potentially harmful solar flares.

But Sunjammer does have a mission profile. Via Houston-based company Celestis Inc., Sunjammer will be carrying the cremated remains of various individuals, including Star Trek creator Gene Roddenberry and his wife Majel Barrett Roddenberry. It’s not exactly the Enterprise, but Sunjammer will be boldly going where no solar sailing spacecraft has gone before.