Today on Mars: When Curiosity Brushes Away The Red Dust, Mars Looks Pale

Curiosity has used its special planet-cleaning kit for the first time. 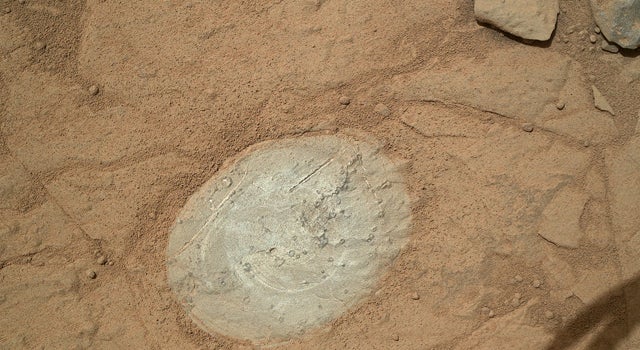 The Mars rover Curiosity is not afraid of getting dirty–it swallowed some scoopfuls of dirt to clean itself out–but sometimes, it needs a clean work surface. To that end, the rover just used its special brush for the first time, clearing away the dust from a specific flat rock it plans to study in greater detail.

The aptly named Dust Removal Tool is a motorized wire-bristle brush that spins on the end of the rover’s arm. The Alpha Particle X-ray Spectrometer and the Mars Hand Lens Imager–the latter of which took the picture you see above–share real estate on the end of that arm. The dust brush is designed to clear a spot for those tools to take measurements they otherwise wouldn’t be able to take, with dust covering everything. The same company that built this brush, Honeybee Robotics, also built the brushes and trusty Rock Abrasion Tools, or RATs, on the Spirit and Opportunity twins.

Now that it’s cleared up, APXS and MAHLI will do some further work on this target, which has been christened Ekwir_1, underscore included. It’s a spot on a rock in the Yellowknife Bay area of Mars’ Gale Crater. Weird that it looks sort of yellowish once cleared of its red Martian dust.

The Curiosity team is looking at other interesting rocks in this area that may make good targets for the rover’s hammer drill. That will be a key development–no previous rover has been so well equipped to drill into another planet.