Thermography scans show that when you lie, your nose heats up. 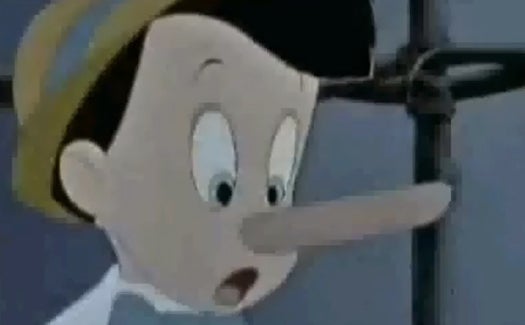 To tell if a person is lying, just measure his or her nose. No, not the length–the temperature. Researchers at the University of Grenada are calling it the “Pinocchio Effect,” after–you guessed it!–the marionette who just couldn’t seem to tell the truth and become a real boy. Thermograms show that the old fairytale isn’t all that far off. Though the nose doesn’t grow when you lie, its temperature (along with that of the muscles in the inner eye) rises.

So here’s how it works: When we lie about our feelings, a brain element called the insula (or insular cortex) is activated. As part of the brain’s reward system, the insula activates when, say the researchers, we experience “real feelings.” The insula is believed to control both emotion and body temperature (among other things, like consciousness and pH), and the researchers found a strong negative correlation between insula activity and temperature increase. They also found that feelings of high anxiety tend to increase facial temperature.

It’s not totally clear why a lie would have that effect; the insula is a pretty poorly-understood area of the brain. But the researchers found boosted activity in the insula during lying, so it seems like it’s involved, somehow.

The researchers captured this phenomenon using thermal cameras. The higher the temperature of an object is, the more radiation it emits. Thermal imaging cameras detect radiation and make an image of it, a thermogram, like the one below: 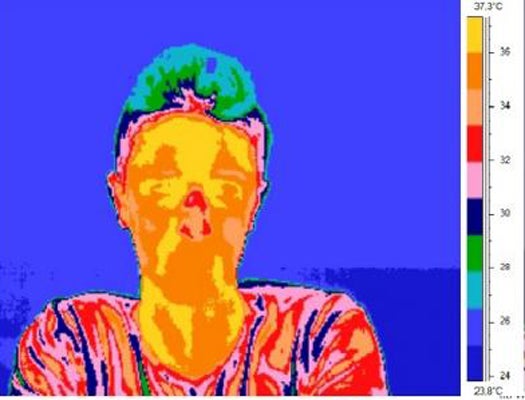 And it’s not just useful for lie detection; the researchers have found numerous other applications of thermography, unrelated to vintage Disney movies. They found that the face cools when we put in a lot of mental effort and heats up with an anxiety attack. They can detect arousal in both men and women by measuring the temperature of the chest and the genitals. And all from a tech that was developed during WWII with the aim of giving soldiers night-vision.

But the most interesting aspect might be the focus on this “Pinocchio effect.” It’s part of a doctoral thesis, according to HuffPo Science, and yet to be published in a peer-reviewed journal, but we’re curious to see the conclusions.