A Supernova Fades Gloriously into a Supernova Remnant

When light from an exploding star in the Large Magellanic Cloud reached Earth in 1987, it was the closest supernova... 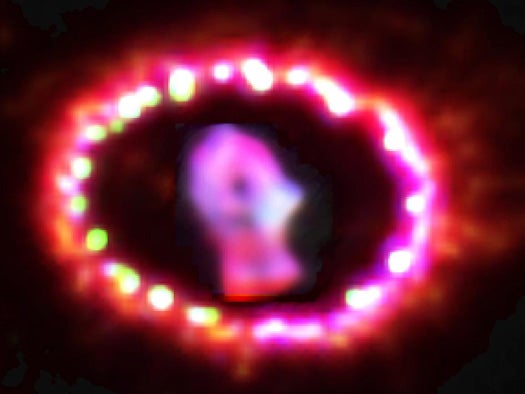 When light from an exploding star in the Large Magellanic Cloud reached Earth in 1987, it was the closest supernova explosion astronomers had witnessed in centuries. Now Supernova 1987a is making history again, this time as the youngest supernova remnant that can be seen from Earth.

The supernova debris has been dimming in the years since its discovery, but a team of astronomers announced today that the debris is now beginning to brighten again. This means that it is being lit by a different power source, and is a sign of 1987a’s transition from supernova to supernova remnant.

When a supernova forms, most of its light comes from the radioactive decay of elements created in the explosion, which decreases and fades over time. As you can see in the image above, 1987a is surrounded by a ring of detritus that flew off the progenitor star before it exploded. Inside the ring, the fish-shaped cloud of star guts is expanding ever outward. Some of this material is starting to hit the surrounding ring, which is creating shock waves that produce X-rays. These X-rays, combined with shock heating, are the new power source that is causing the supernova remnant to brighten.

When the rest of the expanding stellar debris hits, the ring will shred and little of the former star’s history will remain. Until then, scientists can study the last several thousand years of the stars life by observing the swirls of gas and interstellar stuff.