Rather than bringing people into the lab, researchers at MIT are putting tiny labs into people via a tiny implantable... 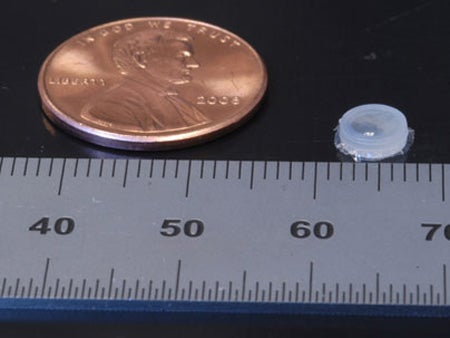 Rather than bringing people into the lab, researchers at MIT are putting tiny labs into people via a tiny implantable capsule that can track the growth of a tumor or detect heart-deterioration or even silent heart attacks from inside the body.

The miniature lab is small enough to implant via a needle during a normal biopsy, and can remain inside the body vigilantly watching for increased tumor growth. The inside of the device is filled with nanoparticles, each sporting an antibody specially designed to bind to specific molecules like those that are produced by certain kinds of tumors or by damaged heart muscle cells.

A semi-permeable membrane keeps the nanoparticles in while allowing molecules from the body to pass through. Doctors can then check for clusters of particles with a simple MRI. Judging from the density of clusters of certain molecules, doctors can tell if a nearby tumor is growing, receding, or remaining static. Or, in the case of patients with heart issues, doctors can monitor for silent heart attacks–small attacks that often go unnoticed–or for the presence of damaged heart tissues in those at risk of a second heart attack.

To simplify the whole affair, the MIT team is now developing a prototype of the device that can produce a signal when prompted by a magnetic wand that doctors can simply wave over the embedded sensor. Such a scheme cuts down on complexity, and reduces the need for expensive MRI scans.