New nanotube “microworms” could lead to new types of embeddable biological sensors or drug-delivery systems, according to researchers in Boston.... 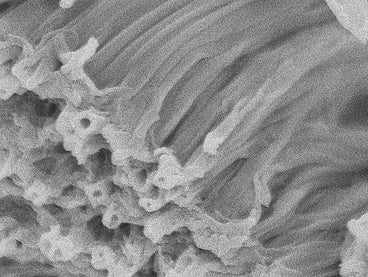 New nanotube “microworms” could lead to new types of embeddable biological sensors or drug-delivery systems, according to researchers in Boston. The tubes’ length keeps them well anchored in the body, where they can monitor chemical conditions or slowly leak medicine into targeted areas.

Researchers at MIT and Northeastern University developed the nanotubes, which are made of a porous membrane and can be filled with various materials.

There are plenty of other microparticle systems, including those that monitor medical conditions or deliver drugs to certain organs. But they are usually spherical and small enough to be swept away from their intended location. These tubular microworms, by contrast, are more easily anchored in a certain spot.

They are about 200 nanometers across, or less than one-hundredth the width of a human hair, allowing them to hang out in the body without triggering any immune response. To build the microworms, researchers used a chemical vapor deposition method, which involves coating materials by vaporizing a material and letting it float onto a surface. In this case, researchers coated an aluminum oxide layer that contains tiny pores. Then the coated material was dissolved away, an MIT news release explains. This leaves a series of hollow tubes in the pores’ place, which can be filled and capped at either end.

The microworms could be filled with material that fluoresces under certain conditions, and then injected under the skin, allowing non-invasive continuous monitoring of biomedical phenomena. Diabetics could check their blood sugar simply by looking at their skin, for instance. The tiny tubes could also be used to slowly leak medicine into the body.

Karen Gleason, a chemical engineering professor at MIT, led the research effort, which is described in a forthcoming issue of the Proceedings of the National Academy of Sciences.