Genetically engineered mosquitoes could even spread genes to other insects 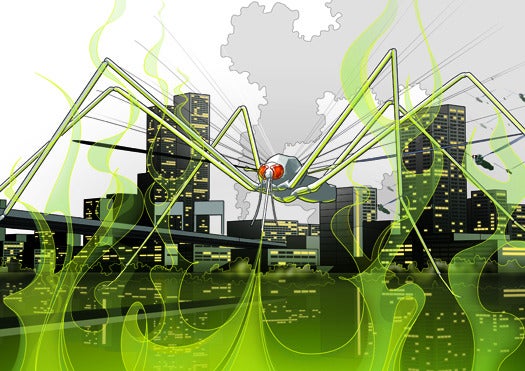 As carriers for diseases such as malaria, dengue fever and yellow fever, mosquitoes are the deadliest creatures on the planet, responsible for millions of human deaths every year. And as the planet warms, the insects are broadly expanding their turf and bringing their diseases with them; thousands of cases of dengue, a tropical disease, have appeared in the U.S. in the past five years. DDT was long used to control the mosquito population, but it is now widely banned, and in any case, many scientists believe that mosquitoes quickly build up a resistance to the insecticide. That, in part, is why the battle against mosquitoes has gone genetic.

Generally speaking, the goal of gene-based mosquito-control projects is either to kill the insects or make them benign. Researchers at Johns Hopkins University, for example, are studying mosquitoes that were made malaria-resistant through the activation of a gene responsible for a protein that blocks the infection. And the British company Oxitec has engineered a strain of mosquito that cannot survive without regular doses of tetracycline; in the wild, these mosquitoes would survive just long enough to mate and pass on their tetracycline-junkie genes to their doomed offspring. In a trial in the Cayman Islands last year, Oxitec-modified mosquitoes were able to cut the overall population by 80 percent in just six months.

But the problem is that we don’t fully understand how mosquitoes and the diseases they carry would adapt in response to such experiments. New strains of malaria and other diseases could emerge. Jo Lines, a malaria expert at the London School of Hygiene and Tropical Medicine has described the process as “a series of arms races that the [malaria] parasite has consistently won.” Three percent of the offspring from Oxitec’s tetracycline-dependent mosquitoes survive—what happens if those bugs breed with wild mosquitoes?

It’s even possible that the changes we induce in mosquitoes could move into other animals. Horizontal gene transfer could result in midges, gnats and black flies developing the same mutations, including the unfortunate characteristic of dying shortly after hatching—and a mass die-off of insects that provide sustenance to birds, bats, frogs and fish would be a food-chain disaster.

Joe Conlon, a technical adviser for the American Mosquito Control Association, favors using a variety of techniques all at once—dispersing larvicide, which is less environmentally harmful than pesticides that kill adults; planting Ovitraps, which attract egg-laying females; and, where possible, getting rid of the water impoundments where the insects breed.