A team of scientists is feeding TNT to a flock of sheep. A. Morrie Craig, a veterinary scientist at Oregon... 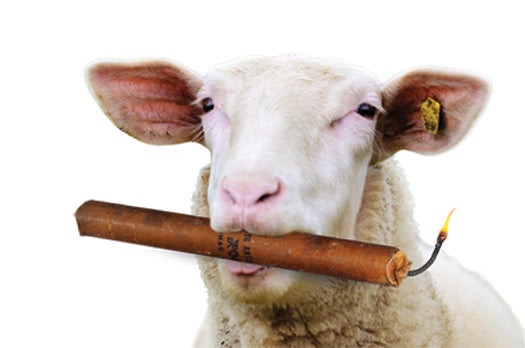 A team of scientists is feeding TNT to a flock of sheep. A. Morrie Craig, a veterinary scientist at Oregon State University, has found that the cud-chewing mammals can efficiently clean up explosives-contaminated soil, of which there are 1.3 million tons throughout the U.S. TNT and other explosives from military munitions training and the remnants of old factories remain in the ground for decades.

This residue rarely poses an immediate health threat, but officials at the Department of Defense fear that it could seep into groundwater or poison plants (which has happened before). Conventional cleanup techniques, such as incinerating the soil, are expensive and time-consuming. Sheep will work for free.

In 2004, Craig discovered that the bacteria in a sheep’s stomach that help digest cellulose can also rapidly convert TNT into a harmless compound. In recent experiments, he and researchers from the U.S. Department of Agriculture fed sheep TNT for three weeks and found that it broke down so completely that no traces of it or any related compounds remained in the animals’ feces.

Craig and his colleagues plan to plant grasses in TNT contaminated soil to suck up the explosives. While the sheep munch away, the bacteria in their digestive tract take care of the rest. Craig’s lab is testing the grazers on soil from a military base. He estimates that a flock of 20 could clear an acre of grass in a month, and completely rid it of munitions residue in less than three years.

Craig points out that even if a TNT-eating sheep’s meat found its way onto a barbecue, it could never explode or cause health problems: “The ingested TNT is broken down into small molecules that are in no way similar to the original compound.”