The opening riff of “Takin’ Care of Business” thumps rhythmically from an iPod as a room full of middle-aged military... 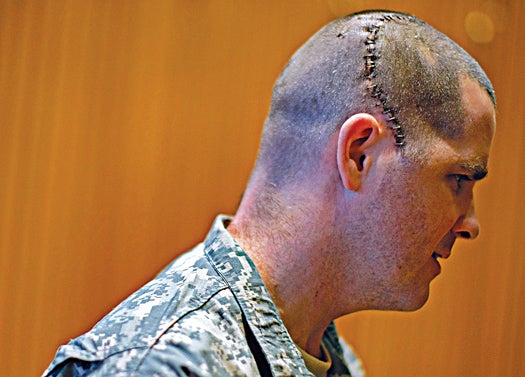 WASHINGTON - FEBRUARY 01: U.S. Army Staff Sergeant Jeremy Murphy wears a scar from his injury on his head after just being presented with a Purple Heart during a ceremony at Walter Reed Medical Center February 1, 2008 in Washington, DC. Staff Sergeant Murphy was awarded the medal after he recieved a bullet wound in his head while on tour in Iraq. (Photo by Mark Wilson/Getty Images) *** Local Caption *** Jeremy Murphy. Mark Wilson
SHARE

The opening riff of “Takin’ Care of Business” thumps rhythmically from an iPod as a room full of middle-aged military veterans tap in time on drums. This is the sound of brain rehab.

One beneficiary of the treatment is retired U.S. Air Force senior master sergeant Jim Dowding. After two stress-related strokes—a common non-combat cause of TBI—he didn’t dare take a wrench to his beloved 1979 Lincoln. “I couldn’t work on anything with more than two pieces,” Dowding says. But since he began drumming, “I work on my car all the time.”

Next Thaut and his team will compare the long-term effects of the therapy with today’s computer-based therapies. He hopes to eventually offer it to the hundreds of troops returning from war with TBIs.