Safety or Stomach? The Complex Life of Cows 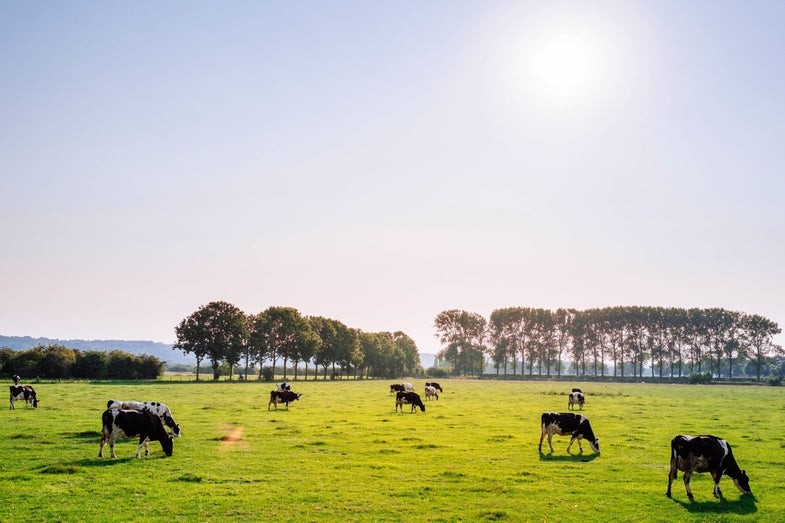 A new study looks at the world through a cow’s eyes—then crunches the numbers. By observing grazing patterns, researchers built a mathematical model of how cows form into groups. As it turns out, the secret lies in how quickly they eat.

First, a quick refresher on complex systems science. A complex system is any set of interacting things that is difficult to model due to the relationships between the things (also known as interdependencies). In general, what makes complex systems, well, complex are things like spontaneous order, feedback loops, and emergent phenomenons (patterns that appear only through interactions or ‘sum-is-greater-than-the-whole’ situations).

If that sounds really vague, it’s supposed to be. The beauty of its broadness is that complex systems analysis can be used to study everything from climate change to human brains to black holes. It can be studied in hard and social science disciplines, leading to a lot of cross-disciplinary collaboration. In this case, a mathematician teamed up with an expert cow biologist to understand how and why the spotted beasts make their moves.

They found that cows have three major tasks: eat, stand around digesting (read: fart), and lie down. They also have to stick with a larger group for safety. Each individual animal can pretty much be seen as fulfilling one of these four needs at any given time. Seems pretty simple, so what makes this a complex systems question?

Cows actually fit into two general groups: larger cows that eat at a faster rate, and smaller cows that eat much more slowly. There are also some cows that fluctuate between the groups, sometimes finishing their greens faster, and sometimes slower.

“Since they eat at varying speeds, the herd can move on before the slower cows have finished eating,” Erik Bollt, mathematician and director of the Clarkson Center for Complex Systems Science, said in a statement. “This leaves these smaller cows facing a difficult choice: Continue eating in a smaller, less safe group, or move along hungry with the larger group.” And if the conflict between stomach and safety becomes too much, the cows will split into smaller groups of fast-eaters and slow-eaters.

Bollt and his team devised a mathematical cost function to describe these different tensions facing the herd—a formula that shows how much it costs a cow, in terms of loss of safety or loss of food, to stay put or move from one group to another. They hope it will be used to study other herding animals, and maybe even humans. “The cost function is a powerful tool to explore outcomes in situations where there are individual and group-level tensions at play,” said Bollt. After all, cows aren’t the only creatures who have to decide whether to go with the flow of the crowd or put their food needs first. Perhaps the same math could be applicable in school cafeterias or offices. It would definitely lend some legitimacy to that #fomo you feel when your friends make lunch plans without you.