Big box stores are dying. What do we do with all the bodies?

How to remove, reuse, or recycle these fallen retail giants. 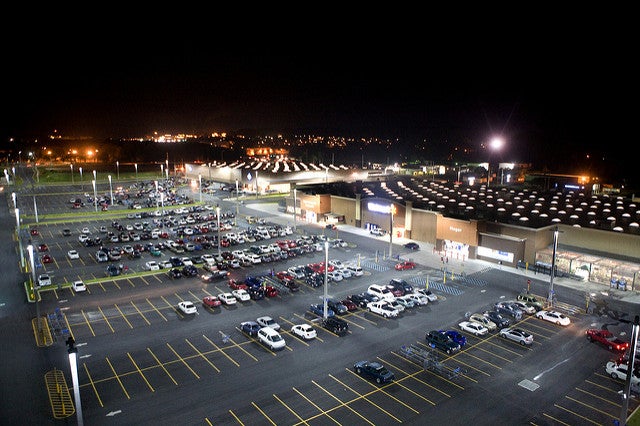 My memory of Toys ‘R’ Us now consists mostly of big empty boxes. While I don’t remember many of the toys I got for Christmas as a child, the image of clumps of wrapping paper and piles of discarded cardboard is forever imprinted in my brain.

Now, Toys ‘R’ Us is leaving us with much bigger empty boxes—but these won’t be as easy to throw away. On March 15, the company announced that, without a Hail Mary influx of cash, the beloved chain will be closing, leaving its 800-odd American storefronts vacant.

The beginning of the big box stores

Founded in 1948 by Charles Lazarus, Toys ‘R’ Us was the model of a post-war business. Most notably, it transformed the children’s toy industry from a seasonal market to an everyday luxury. By its peak in the mid-1990s, Toys ‘R’ Us had cemented its reputation as a “category killer”—a brand so dominant in a single market it snuffed out all competition. But much of Toys ‘R’ Us’s success hinged on its retail space: the big box store. Unfortunately, its downfall may have been brought on by the very same thing.

For millennials and younger generations, big box stores have always existed as part of the country’s landscape, but at one time they were a radical invention. Instead of keeping most of the inventory sealed off in storage, big box stores put the wares—all of them—on display.

It’s difficult to pinpoint the origins of this architectural style, but experts point to 1962 as a watershed year, with the first Walmart, Target, and Kmart stores opening up within a few months of each other. To fully promote their wares, these companies required voluminous and largely undivided retail space, with high ceilings that allowed stock clerks to stack seemingly endless supplies. Outside, they needed big parking lots to fit all their customers, and easy access to highways, to keep car-centric shoppers close.

For decades, these big box retailers thrived, gobbling up smaller stores that couldn’t compete with the diversity and abundance of wares. But the rise of online retail has changed all that. Instead of driving to a big box store, our purchases come directly to us. As a result, 2017 saw a record-breaking 6,700 store closures, including big box stores like Kmart and more speciality retail outlets like Teavana. The Toys ‘R’ Us shutdown shows things are only getting worse for big box companies.

Now, architects, urban planners, and activists are asking: What becomes of these big, empty storefronts and their sprawling parking lots now that the companies inside have closed down or moved on?

“It’s a fork in the road,” says architect Roger Lewis, professor emeritus of the University of Maryland’s school of architecture. In some cases, he says, new companies of similar size may seek to fill these spots. That could well be the case of Toys ‘R’ Us, as a recent report from business magazine Bloomberg suggests Amazon, the very company that killed the category killers, is interested in buying select Toys ‘R’ Us carcasses for Amazon-branded brick and mortar stores.

But even a company the size of Amazon can’t buy every store it puts out of business. (Probably. Hopefully.) There are 10,379,714,043 square feet of retail space in the United States, or 32.5 square feet of retail per person, according to a 2016 report. And the parking lots for each of these retail centers is even bigger. Together, American retail stores and their parking lots equal an area roughly one-third the size of Delaware. That means repurposing vacant box stores requires a little more vision. “One [option] is to tear it down and build something anew,” Lewis says, “and the other option is to repurpose it.”

While it’s not necessarily the preferred option, depending on the circumstances, demolition may be the most practical. “A lot of these big box structures were very cheaply built. They were constructed with off-the-shelf materials and structural systems and mechanical systems. Their lifespan was not really meant to be more than 25 or 30 years,” Lewis says. Walmarts have been torn down all over the country. In some cases, they’ve been swiftly replaced by new, even bigger Walmarts. In other situations, the land has been sold for other purposes and the building parts recycled.

But William Leddy, of Leddy Maytum Stacy Architects in San Francisco, is a proponent of the second option: adaptive reuse, which refers to the process of repurposing existing architecture for a new purpose. Leddy acknowledges the limitations of big box stores, but still believes vacant storefronts are still brimming with potential.

“These cavernous volumes are so adaptive to so many functions,” he says. “You could imagine a new and lively semi-urban environments starting to develop.” Just one idea? Turn ghost stores into vibrant housing. “You’d have to start poking holes in the roof to bring the light in the air in them,” Leddy says, thinking aloud. “The volumes are such that you could probably fit two or three floors of housing and then create courtyards between them.” He’s working toward a day where light rail—or driverless carpool initiatives or electric buses—connects numerous box store apartment communities to one another.

Julia Christensen is an artist and author of the book Big Box Reuse. The book, which was published in 2008, documents the ways 10 communities transformed their own empty box stores. In old Walmarts, Christensen found churches and community centers; in old Kmarts, courthouses and museums. Though not included in the book, one of the most famous big box reuse cases is the McAllen Main Library, which turned an abandoned 124,500 square-foot Walmart in Texas into a single-story library with plentiful community and educational spaces. The McAllen project cost $24 million, according to an interview with Strong Towns, $5 million of which went to buying the abandoned Walmart facility.

Though Leddy sees big box stores fitting into an increasingly urban vision of American life, Christensen says that repurposed boxes will continue to factor into suburban and rural life, too. “In the sites I documented, people enacting the reuse said that community members wanted to drive to church (or school, or the museum), rather than walk,” she told PopSci over email.

Of course, even when a community has a vision for adaptive reuse, it’s not simply a matter of buying an old Toys ‘R’ Us and giving it an extreme makeover. Many adaptive reuse projects fall victim to old zoning laws. While those can be rewritten, Lewis says it’s an uphill battle. “In every one of these situations, almost without exception, when someone comes in and wants to make a change—whatever that might be—there are going to be some people who fear change, oppose change, like it the way it is and are going to fight it,” he says. “This stuff doesn’t go anywhere unless there is political support for it.”

Still, adaptive reuse is gaining ground. In recent years, experts have learned the true size of construction’s carbon footprint and worked to reduce, reuse, and recycle whenever possible. “The greenest thing you can do is reuse an existing building, because the carbon is already embodied in the building,” Leddy says. As a result, he tells his students to see the future of architecture with the keen-eyed gaze of a scavenger, trained to find what’s good about what’s already been built. “The idea of getting an empty piece of land and building from scratch—that opportunity is diminishing,” he says.

Christensen, for her part, hopes for a future where reuse isn’t about giving a second life to an existing building, but rather baked into the cake from the moment of conception. “The best solution, to me, begins long before abandonment—it begins with design,” she writes. “The trend of constructing single-use buildings with no future adaptability in mind has led to [this] immense issue.”